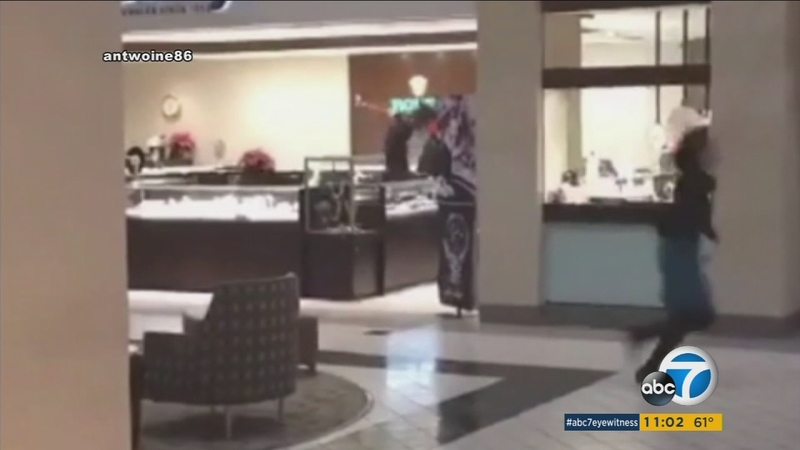 RIVERSIDE, Calif. -- Three suspects were at large after robbing a jewelry store at a Riverside mall, causing a massive police response Sunday night.

Riverside police said the masked suspects used sledgehammers and axes to smash cases and grab items at the Ben Bridge jewelry store around 6:30 p.m. in the Galleria at Tyler. SWAT members from Rialto, Riverside County sheriff's deputies and other law enforcement agencies from surrounding areas also arrived at the scene.

Witnesses at the scene were terrified and reported hearing shots fired in the area, but authorities believe the smashing glass sounds may have caused people to mistake the noise for gunfire.

The mall was temporarily locked down based on initial reports of a shooting at the site. Officers then searched the mall and learned the suspects had fled the scene.

During the lock down, witness Marisol Perez said she was inside Bath & Body Works.

"Everybody was crying and holding each other, so I'm just glad we're all OK," she said in tears.

The store manager tried to keep everyone calm, but Perez feared the worse and messaged her family members.

Once the lock down was listed, many who had been inside the mall were shaken as the ordeal happened only days after the deadly San Bernardino attack.

The investigation was ongoing as the suspects remained at large.