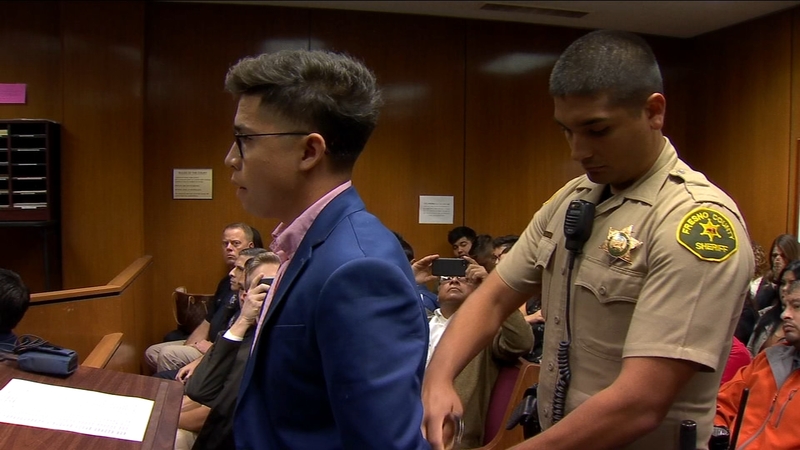 FRESNO, Calif. (KFSN) -- An admission of guilt and a new arrest for an 18-year-old driver who hit and killed Clovis Unified vice principal Gavin Gladding then drove away.

Prosecutors filed the case against Rogelio Alvarez-Maravilla only 20 days before he admitted to all four charges -- including hit and run and misdemeanor manslaughter -- and it could be strategic.

The end of innocence came quickly for Alvarez-Maravilla. The 18-year-old entered a "no contest" plea Wednesday and found himself in handcuffs seconds later.

His arrest in court elicited a lot of emotion from the huge crowd -- including family and friends representing Gavin Gladding, the man whose life he ended in a car crash last month along Friant Road.

But the loudest laments in court came from people supporting Alvarez-Maravilla.

"You guys don't know the person that he is, the family he's been brought up in," said family friend Maria Estrada. "He's a good kid."

Estrada told Action News it's not fair for him to be in jail now.

"The whole thing is not justice," she said. "Just imagine if this happened to your child. How would you feel?"

"But just put yourself in the Gladding's shoes," a reporter countered.

"I do," she said. "But I'm not because my friends are the Maravilla family and nobody speaks on their behalf and I'm going to speak on their behalf."

Fernanda Lopez and Moises Guerrero, the two people accused of helping disguise the crime by repairing the truck, both pleaded not guilty Wednesday.

Alvarez-Maravilla turned himself in five days after the deadly crash and legal analyst Tony Capozzi says it looks like he's done everything right since then, which could be a factor when the judge punishes him.

But he can't erase his crime.

Gladding's family is reserving comment for now, but they were happy about taking a step towards justice.