A community meeting is scheduled for 6 p.m. Tuesday at the Dunlap Community Center to discuss the wildfire. Fire officials will talk about their current efforts in fighting the fire and answer any questions residents may have.
KFSN 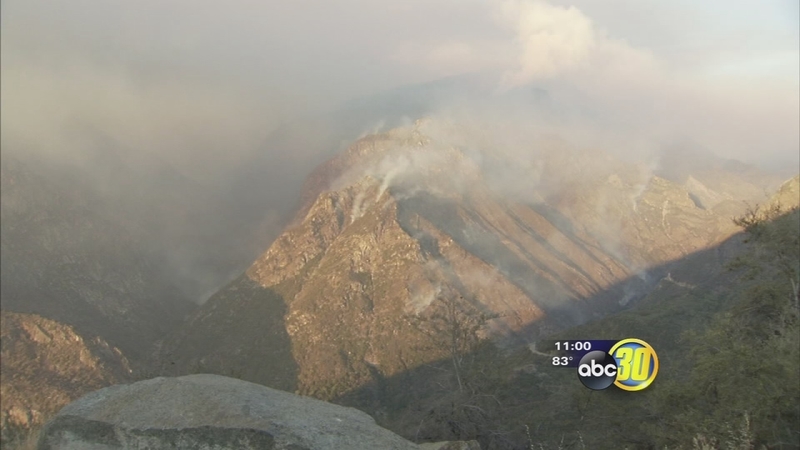 FRESNO COUNTY, Calif. (KFSN) -- A wildfire burning in the Sierra National Forest has grown to nearly 21,000 acres with zero containment. The Rough Fire, which was sparked by lightning, forced new evacuation warnings on Monday at Black Rock Reservoir. In addition, the Cedar Grove area, Hume Lake and Monarch Wilderness are all closed.

This fire is burning in the remote part of the national forest. But even though it's far away from most people, fire officials say they're concerned it will continue to grow rapidly. Crews are calling the blaze "volatile" and "unpredictable." The fire is on steep and rough terrain, so they are fighting it with helicopters and other air attack units.

Action News is told the focus of firefighters as they work into the night is building solid containment lines, since they can't be on the front lines of the difficult-to-access fire. Fire crews say the shifting winds and weather are also making it tough for crews to keep the fire from jumping in different directions.

"Given that this fire started earlier in the season than they normally expect, that's a concern because it can actually go a lot longer. We're looking at the weather pattern staying the same, so it could continue to burn for some time," said Maureen Brooks of the U.S. Forest Service.

There weren't a lot of crews at one of the fire camps around the perimeter of the blaze because fire officials say they are now attacking this fire during nightfall in addition to the air attacks during the day.

Fire officials say they are suggesting campers and hunters to change their plans if they are planning on heading near the fire. It's smoky and it can be dangerous as fire crews work in the mountains.

Summary:
Due to the spread of the Rough Fire, the Fresno County Sheriff's Office has issued evacuation warning notices to people in the area of Black Rock Reservoir, which is east of Pine Flat Lake on the Sierra National Forest. There are not many residents or employees in the area, however, Black Rock Campground can be a popular destination for visitors is closed. The Sheriff's Office wants to make the public aware that they no longer have access to it with Blackrock Road now being closed to motorists. It will remain closed until authorities determine it is safe to reopen. Highway 180 remains closed to the public from the Hume Lake intersection to Cedar Grove in Kings Canyon National Park.

On Sunday, Kings Canyon National Park issued a closure of the Cedar Grove area. Public access on Highway 180 beyond the junction of Hume Road is closed. The fire is not threatening these facilities; the closure was necessary because Highway 180 is the only route in and out of the area. The road to Hume Lake remains open.

The South Central Sierra Incident Management Team is inviting the community to a public meeting that will take place in Dunlap, California August 18, 2015 at 6pm. The public meeting will take place at the Dunlap Community Center located at 39489 Dunlap Rd. Dunlap CA, 93621. The goal of this meeting is to discuss the current and future activity of the Rough Fire. Representatives from the management team, the Sierra National Forest, the Sequoia National Forest and the Sequoia Kings Canyon National Park along with other cooperators will be giving information and answering questions.

Projected Incident Activity
Potential for significant runs could occur downslope towards the Kings River and continue east towards the Monarch Wilderness.

Weather Concerns
Strong high pressure over Southern California will bring warmer and drier
conditions to the fire along with light winds aloft. Terrain will drive the wind
patterns. Inversions will intensify with poor mixing and persistent smoke.

Overnight thermal belts will persist with temperatures as much as 10 degrees
cooler at the canyon bottom than at 9000 foot ridge lines.