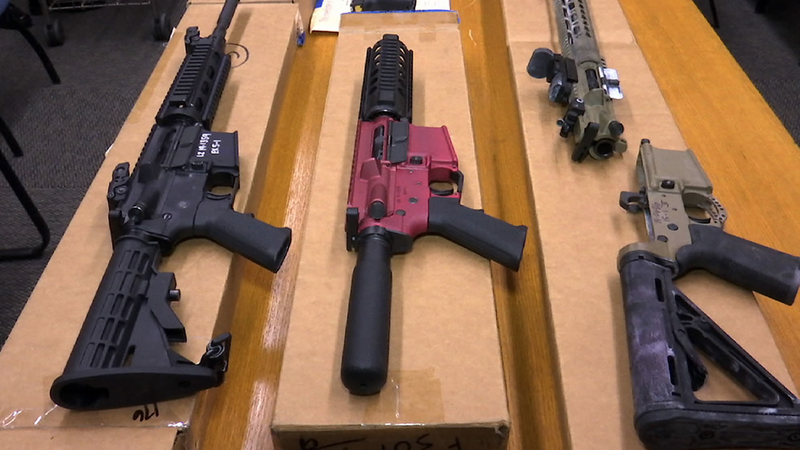 California may empower citizens to sue over illegal firearms

SAN FRANCISCO -- Even before the tragedy in Sacramento, the sale and manufacture of illegal guns, has been a top concern of local police and lawmakers.

Tuesday, a new bill advanced in the state Senate Judiciary Committee. Senate Bill 1327 would let private citizens sue anyone who distributes or helps to make those illegal weapons.

Democratic State Senator Robert Hertzberg of Los Angeles is behind the bill.

It would let private citizens sue anyone who distributes illegal assault weapons, parts that can be used to build them or guns without serial numbers.

The penalty would be at least 10 thousand dollars for each weapon along with attorney's fees.

"We believe that this creates a powerful incentive for folks to help to get these weapons off the streets, out of the hands of criminals," Hertzberg said at a press conference just blocks away from the Sacramento mass shooting.

Ghost guns have become a growing problem in the Bay Area and across the country.

A steep rise when compared to 2015, when they only took four.

"A ghost gun or privately made firearm is a firearm that can be made at home with pre-manufactured parts," said Sgt. Christian Camarillo with the San Jose Police Department, "You can order these on the internet, it takes some very simple machining and you put it together and it works just like a firearm."

The ghost guns are not registered and don't have a serial number making them untraceable.

Sacramento leaders joined family and community members for a vigil to honor the lives lost in Sunday's mass shooting.

The ghost gun manufacturers can also illegally enhance the guns.

"We've seen handguns that have been converted to full autos. So you're talking about a machine gun, you can hold in your hand," Camarillo said.

Though legal self-made firearms are allowed in the state of California, they cannot be sold. If you make one, you have to apply to get a serial number.

Earlier this year, in an effort to reduce the number of ghost guns on the street in Santa Clara County, Supervisors Cindy Chavez and Otto Lee partnered with District Attorney Jeff Rosen on an ordinance prohibiting the possession and manufacturing of ghost guns.

It would build upon a state ghost gun regulation law going into effect in July to help ensure safety in the county from what officials call "deadly DIY projects."

Following a string of incidents involving ghost guns in late March, the San Jose Police Department announced a Cash for Ghost Guns program, offering money to people who give tips leading to the seizure of ghost guns.

Hertzberg's SB 1327 is patterned after a similar Texas law that allows citizens to go after those who provide or assist in providing abortions.

"This is tit for tat political gamesmanship, which is the worst reason to be passing some kind of a bill," said Chuck Michel, president of the California Rifle and Pistol Association and an attorney who wrote a book about California's complicated gun laws. "You're going to deputize a bunch of amateurs - non-lawyers, non-cops - to judge a neighbor's actions and then give them the right to drag them into court over it."

In all, before passing, SB 1327 would have to clear two committees, get a full Senate vote and pass the Assembly before going to the governor.