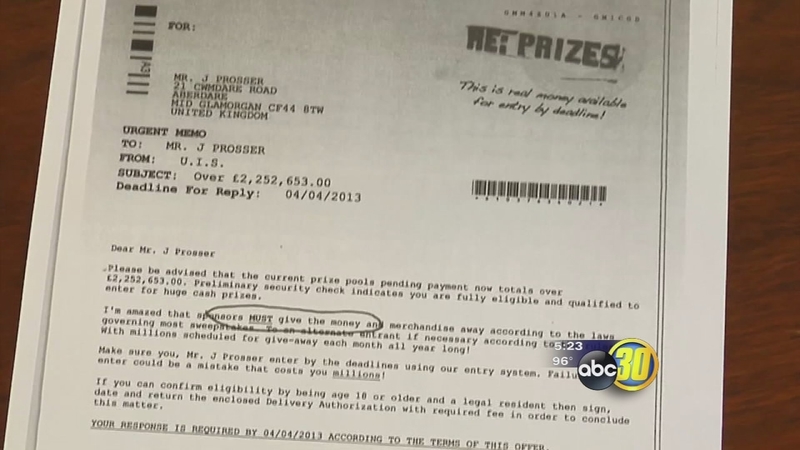 FRESNO, Calif. (KFSN) -- For most people, winning the lottery is a dream Come true. But you should be wary of so-called guaranteed prizes.

"You send in $20, and then they guaranteed you a certain amount of money," said Nancy Trottner, victim.

Guaranteed is a pretty powerful word. So, Trottner sent in a check for$20-- but no prize ever came.

Instead Trottner was flooded with more solicitations.

So, she called postal inspectors and quickly learned she was not alone.

The suspect, in this case, sent more than 3.7 million letters to over 150 countries in a two-year span. Victims' losses are over $11 million dollars. On the letters, in the fine print, there is a disclaimer that says, "participants will receive a list of other contests-- no cash prize."

"He seemed to target senior citizens who would not pay attention to that disclaimer, instead would notice the bold claims that you have won millions of dollars," said Kim Gordon, US Postal Inspector.

Inspectors said the hopes of winning money or a prize, can often cloud victims from seeing the big picture.

The Federal Trade Commission said this scheme is one of the largest of its kind and a civil suit was filed against those linked to the creation of the solicitation.