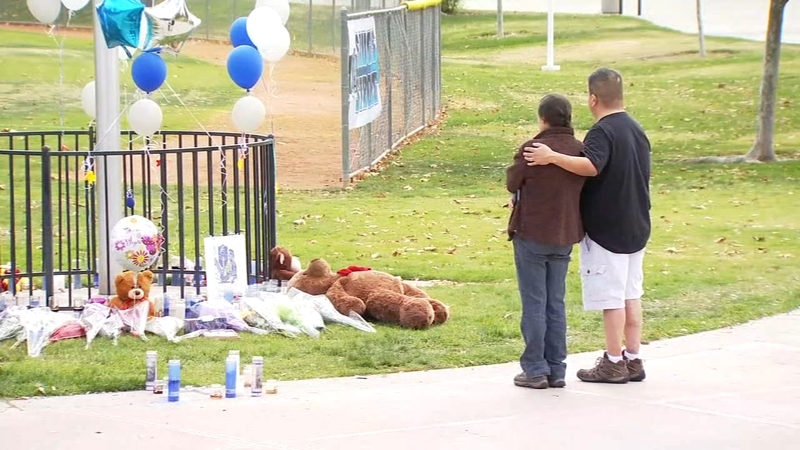 SANTA CLARITA, Calif. (KFSN) -- The Santa Clarita community is in mourning one day after authorities say a student gunman opened fire on his peers at Saugus High School, before turning the gun on himself.

Authorities released the identity of one of the victims, 15-year-old Gracie Muehlberger, who died from her injuries. The other teen who was killed has yet to be identified as they are still notifying family members.

Candles, balloons, messages of hope served as a reunification center during tragedy and is now a growing memorial for two innocent lives lost.

Doctors at Providence Holy Cross Medical reassured the public Friday with updates on the two trauma victims brought to them, saying both teens are recovering and expected to be discharged soon.

"Being shot in the torso is a big deal. They were very stoic," said Dr. Boris Borazjani. "I'm very proud that as young adults, they were able to compose themselves."

Stoic victims like Addison, whose father shared a photo of her smiling from her hospital bed.

LA County Sheriff Alex Villanueva addressed the media as a father, grandfather and member of the community that is searching for answers.

"It still remains a mystery why so I just want to encourage everyone to hold your kid a little tighter," Villanueva said.

The Santa Clarita community is in mourning one day after authorities say a student gunman opened fire on his peers at Saugus High School, before turning the gun on himself.

"No motive or rationale has been determined for this assault," said Capt. Kent Wegner.

"We know it was a planned attack. It was deliberate. He knew how many rounds he had, for example, however, the details we don't have those yet," Villanueva said.

"He was just standing by himself, walked to the center of the quad area, dropped the backpack and withdrew his firearm, and started firing," he said.

ATF agents are working with the LA County Sheriff's Office to determine the origins of the gun used. Officials say they've traced six firearms to the student's family -- none of which were used in the attack.

Now searching for a sense of normalcy, the community is coming together.

"We have a lot to process in the coming days weeks and months, and we will get through this together," said Santa Clarita Mayor Marsha Mclean.

The suspect gunman remains in critical condition. As the search for the motive continues, the community is doing what they can to move forward.