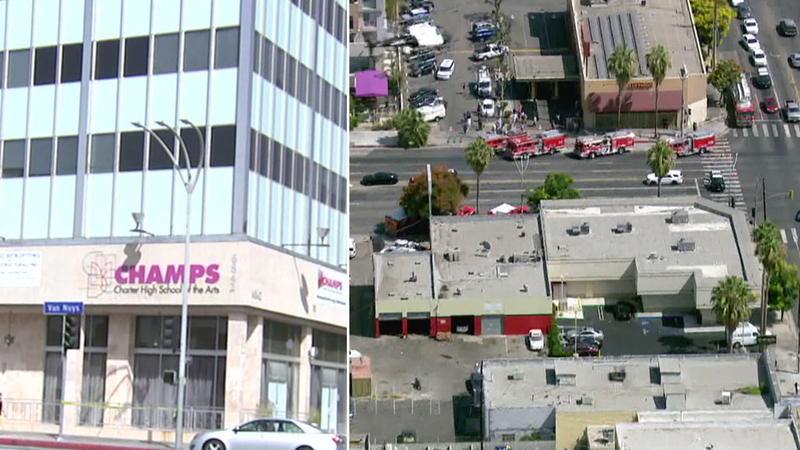 LOS ANGELES -- A Van Nuys charter school employee and student were wounded in a shooting across the street from the campus on Thursday, authorities said.

The shooting was reported shortly after noon outside of CHAMPS Charter High School of the Arts Multimedia & Performing, located in the 6800 block of Van Nuys Boulevard. The school was on lockdown amid the investigation, Los Angeles police said.

Police confirmed the shooting did not take place inside the school but near a Jack in the Box across the street.

UPDATE: One suspect is in custody and we are actively searching for a second suspect near the school. The school will remain on lockdown until the area is safe. We are working with @ChampsCharter school on a reunification plan for parents and students.

At a media briefing, authorities said a female employee of the school and a student were both shot and wounded. The student, an 11th grader, suffered a leg injury and the employee suffered an arm injury. They were said to be in stable condition.

Sgt. Barry Montgomery said he doesn't know yet if the victims were targeted.

Los Angeles police said one of two suspects was taken into custody and the second one was found following a barricade situation at an apartment building behind the fast-food restaurant.

Jordan Duke, the school's communications director, said the shooting occurred during lunch hour, which is when some students and faculty are offsite.

All other students and staff were safe and accounted for, he said. Kids were being released to their parents with identification through the main office.

Family members who were near the school to be reunited with students shared their panic.

A woman describes her panic after hearing her family member was sheltering in place during a shooting near a charter school in Van Nuys on Thursday.

"She couldn't call me or anything. They were too scared to call. I guess she thought that they were in the building and didn't want to risk anything by walking outside, so they stayed in the bathroom," one woman said about her sibling, who was eventually escorted to a classroom by law enforcement officers.