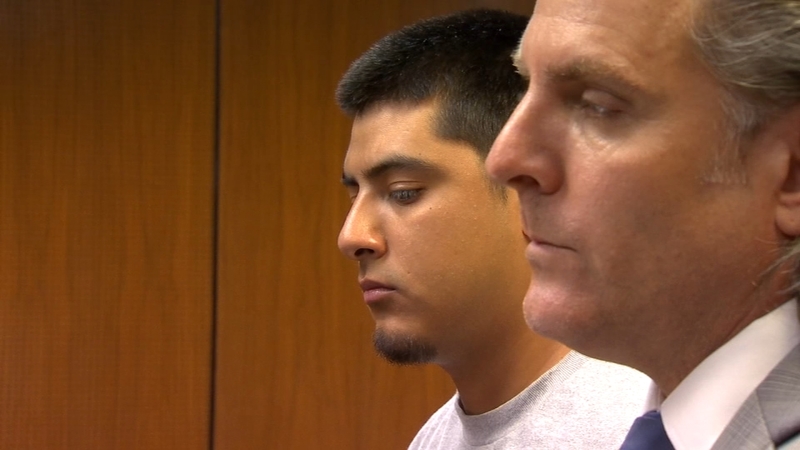 FRESNO, Calif. (KFSN) -- Jose Hernandez did not fight the charges and pleaded shortly after admitting he hit 58-year-old James Raby from behind last December. Raby was thrown from his bike and died.

Hernandez- stood next to his attorney as he read a statement he wrote to the court.

"He indicates all I can say is my regards to the family, who suffers from the loss of a loved one. I am willing to accept the consequences to my actions, even if it means doing it the hard way. I apologize," said Hernandez' Attorney Marc Kapetan.

NOW: Jose Hernandez is being sentenced for a deadly DUI hit and run last year. James Raby was riding a bike when he was struck and died of major head injuries. pic.twitter.com/EcZEspRA7u

Raby was employed by catering business and was pedaling home when he was killed. His mother said her only comfort is knowing her son is in heaven. She hopes Hernandez changes his life course.

‘I hope this young man never drinks and drives again,’- Melva Raby told the judge she lost her only son and this has been the hardest thing she has gone through in her life. pic.twitter.com/JTOogJudPa

"This has been one of the hardest things I have ever done in my life. Hopefully, he has learned a lesson, of drinking and driving," said the victim's mother Melva Raby.

She was comforted by her husband also spoke about the void left in her life- and the pivotal point it is in the life of Hernandez.

Outside court- the victim’s mother and defendants mother hugged. Melva Raby told her, ‘Your son made a mistake, you will be ok.’ pic.twitter.com/SG4lImgLm3

"I just really hope that this doesn't happen again in this young man's life. I hope that this is it. I couldn't imagine another family having to go through this," said the victim's daughter Heather Raby.

The judge agreed to the stipulated sentence for several reasons. He noted Hernandez had no prior criminal past.

Hernandez' attorney noted the pain that remains for both families.

Jose Hernandez was remanded to begin serving his sentence pic.twitter.com/Q6u62LlaFP

"All around this is just an extremely tragic matter. I just witnessed my client hugging his family goodbye because they are not going to see each other for the next X amount of years. But I can't imagine how that pales in comparison to the Raby's not being able to see their loved one for the rest of their lives," said Kapetan.