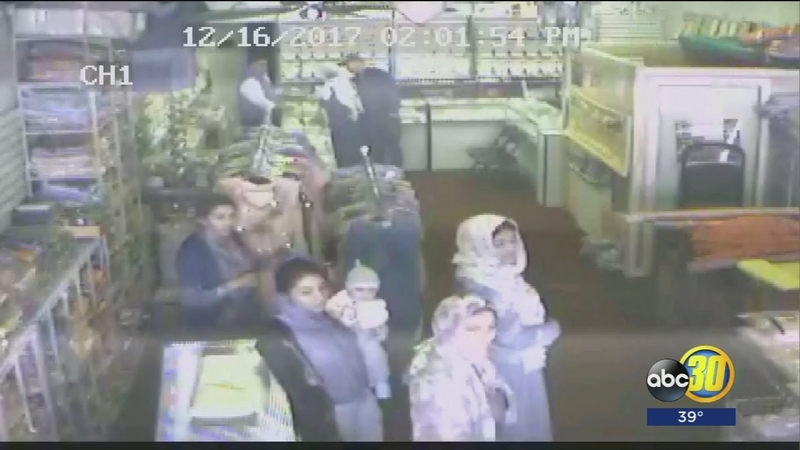 FRESNO, Calif. -- The Fresno Police Department is searching for the people they say distracted a store clerk Saturday afternoon and stole a large amount of jewelry from them.
RELATED: Police search for 7 people accused of stealing jewelry in Northwest Fresno

The burglary happened during business hours at Sohna Jewelers and Fabric off of Shaw and Marks Avenues.

Police officers say the people shown in the surveillance video deceived a clerk at Sohna Jewelers and Fabric store. A total of six women and one man involved in burglarizing the business in broad daylight-- they even brought a baby with them.

Lt. Rob Beckwith of the Fresno Police Department said, "Dressed in Middle Eastern attire came into the store performed some type of ruse to the clerk to distract him."

Police officers say it all happened within minutes.

The distraction allowed one woman to get into a back room where the suspected thief ducks down and goes into the back.

Officers say that allowed her to take a large amount of gold jewelry from a safe, before taking off through the back door to a getaway car

Lt. Beckwith said, "There's no question, based on what we can see in the video they obviously planned this they were working together conspiring together to commit this crime."

Officers say it does not look like any of the suspects had weapons or used any types of threats but they can be facing various types of felony charges ranging from grand theft burglary to conspiracy.

The suspected car involved could be a Dodge Caravan with damage on the driver's side and paper plates.