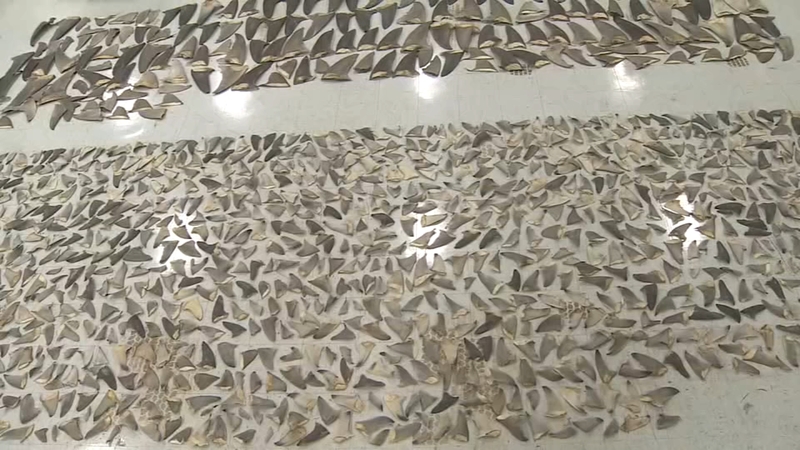 MIAMI, Fla. -- Officials have confiscated about $1 million worth of shark fins.

The shipment includes roughly 1,400 pounds of the animal products that were hidden in 18 boxes.

"An estimated one million sharks are killed every year for their fins," said Eva Lara with U.S. Fish and Wildlife.

"Wildlife inspectors of the U.S Fish and Wildlife Service are the nation's frontline defense against illegal wildlife trade," Lara said.

Officials said this is one of the largest illegal shark fin seizures ever.

"The shipment originated in South America, and it was in transit in the United States on its way to a final destination in Asia," Lara said.

The president of the Humane Society Legislative Fund responded by saying in part that this case "speaks to the worldwide crisis facing sharks."

She goes on to call for action in the US Senate and said "sharks are worth more alive than in a bowl of soup."

"Studies will tell you that there is no scientific evidence that shark fin soup has any medicinal purposes or benefits to humans whatsoever," said Zachary Mann with U.S. Customs and Border Protection.

Authorities said they are hoping this sheds a light on the dangers of the illegal shark fin market.

"Unable to swim and move water through their gills, the shark sinks to the bottom of the ocean and slowly suffocates, and some bleed to death and others are eaten by scavengers," Lara said.

About a third of the shark species in the world are threatened.