Fresno artist hopes to give Kobe portrait to Vanessa Bryant 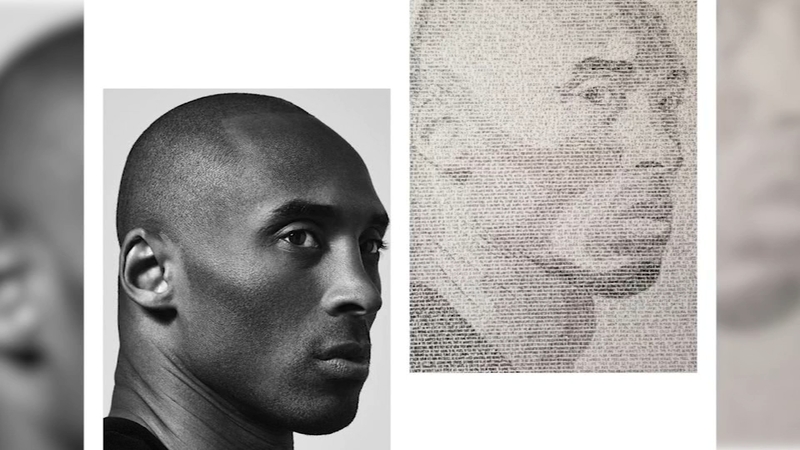 Fresno artist hopes to give Kobe portrait to Vanessa Bryant

This Sunday Kobe Bryant would have turned 42 years old.

The Laker legend passed away in January, and his death inspired many artists to create pieces in his honor.

One artist in Fresno who goes by the name of Sharpie-boy did the same.

His Kobe portrait is handwritten in Sharpie.

Nick Montgomery started working on the piece after the tragic helicopter crash that killed Kobe Bryant, his daughter Gianna and seven other victims on board.

"Because of who he is, and what I do, it was just a match made in heaven. I need to create something that leaves his legacy and memory as high as I can keep it," says Montgomery.

Montgomery uses words to create his portraits. He came up with the idea in an art class. He wanted to draw Martin Luther King Jr. using his 'I have a dream' speech. He also created a tribute piece to 9/11 using all of the victims' names who passed away to create the Twin Towers.

"From far away it's a picture, there's depth and meaning within words and people always say pictures are worth a thousand words. So I spun that around and said 'I'll use those thousand words to make a picture'."

Sharpie boy's Kobe took him four months to finish. He included every single player that the Laker played with. He also added Bryant's Dear Basketball short film that won an Oscar. Halfway through the piece, Montgomery realized he needed to add Vanessa Bryant's speech that she gave at his funeral.

"I don't know how it worked or how it happened, but they're the very last words she spoke and all I had room for was to sign my name and date it. That was it, everything I ever imagined fit on there perfectly."

Once Montgomery starts the piece there's no re-doing it, he has one shot to make sure the writing is perfect. He calls it a labor of love.

"My hands will cramp, I work with them on the ground so I'm bent over trying to make sure that I don't mess up the art piece while I'm writing."

Montgomery's wish is to give the piece to Vanessa. He has tagged her on social media platforms so that she knows the portrait is available for her.

"It would mean the world to me for her to have the original with her, I just poured out my heart into my artwork and know that I tried to encapsulate her husband's life in one portrait."