Six inmates escaped by making their way to the roof and using a rope made out of braided sheets to scale down a 20-foot-high wall.
KFSN
By Brittany Jacob and ABC30.Com Staff 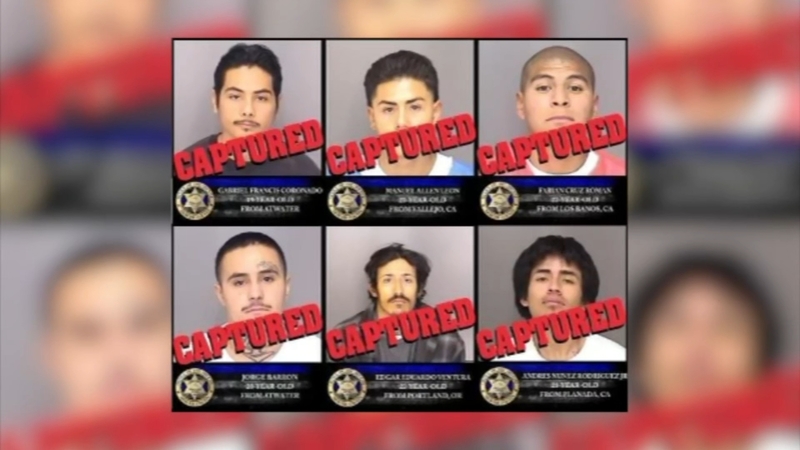 "Make no mistake, the general reason they got out is because we had employees not doing their job," Sheriff Vern Warnke said during a news conference. "Had they been doing their job, regardless of the condition of the building, they would have not escaped."

The sheriff's office said that through their internal investigation, they found that several staff members had "failed in their duties for the safety and security of the facility, along with the community."

Authorities arrested the last two of the six inmates who had escaped from the jail last Friday.

Sheriff's officials say 20-year-old Jorge Barron and 21-year-old Manuel Leon were captured in Glendale, Arizona, with the help of the US Marshals Service and the Glendale Police Department.

This means all six inmates are now back in custody.

The inmates escaped on January 9 this year by making it to the roof of the building and using a rope made out of braided sheets to scale down the side of a 20-foot-high wall.

Sheriff Vern Warnke had said guards didn't notice the inmates were gone until a routine morning headcount nearly eight hours later after their escape, because protocols prohibited them from interrupting an inmate's sleep.

During Tuesday's news conference, officials told reporters that the staff members who had failed their duties worked the graveyard shift and had been "dealt with."

The sheriff said that new safety measures had also been implemented, along with new technology to prevent an escape from happening again.

"These guys (the employees) let the citizens down, they let me down and I take that very seriously," said Sheriff Warnke. "This was a mind numbing kick in the gut and it got dealt with."

In the weeks after the big escape, one by one, authorities tracked down the other four of the six inmates.
22-year-old Edgar Ventura, who was originally jailed for being a felon in possession of a firearm, turned himself in on January 12 at the Firebaugh Police Department after investigators put pressure on his family members.

Hours later, 22-year-old murder suspect Fabian Cruz Roman and 21-year-old Andres Nunez Rodriguez, were captured in the San Diego area with the help of the US Marshals Office and other law enforcement agencies. Authorities believe they were trying to make their way to the US/Mexico border.

RELATED: Reward increased to $10,000 for information on inmates who escaped from Merced County jail

On February 6, Merced County deputies tracked down 19-year-old Gabriel Francis Coronado, who was originally in jail for attempted murder, in the Livingston area of Merced County and arrested him.

Barron, who was initially incarcerated for violating his probation, and Leon, who was originally in jail for assault with a firearm, had managed to evade authorities until Friday, when they were found by Arizona authorities. They will be transported back to Merced County Jail, the sheriff's office says.