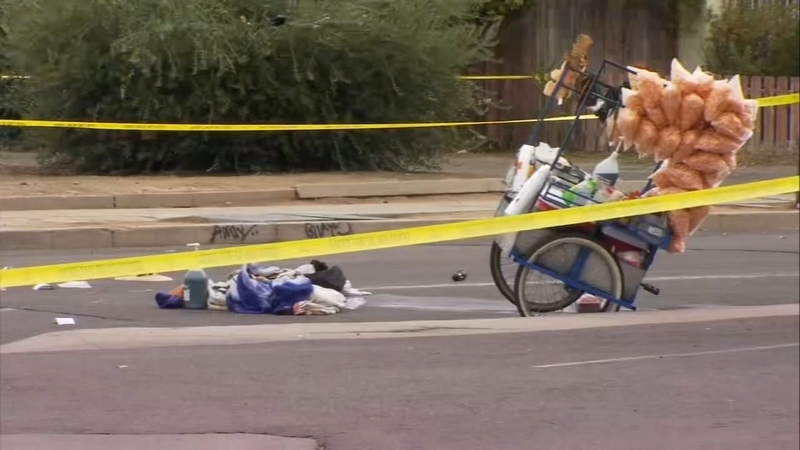 FRESNO, Calif. (KFSN) -- The man accused of gunning down a street vendor in Central Fresno two weeks ago faced a judge on Friday.

The suspect, 18-year-old Jacob Rangel, spent a few minutes in court on Friday, long enough for his attorney to ask the judge for more time to receive and review the evidence against him.

Rangel is accused of shooting and killing Jose Rivera in the middle of the day. Police say the motive was revenge after an incident earlier in the day when Rangel tried to buy several items from the street vendor but didn't have enough money.

On Friday, the victim's family watched the hearing virtually. Rivera's son said he is pleased that justice is being served and Rangel is answering for his father's murder. But he doesn't want to show his face because he is afraid of retaliation.

"Felt like I could breathe for once," he said. "Because I know that sometimes stuff like this happens and people never get caught. So I just felt a little bit of relief."

Standing outside the mural in downtown Fresno that was painted by a local artist in honor of Rivera, his son recalled all the people he met throughout the past 10 years of selling elote, chicarrónes and, in the summer, raspados. His dad told him he enjoyed the freedom to explore and meet different people while also earning a living.

"He loved to talk to people, he loved to make friends. And he always said that. You know, I have so many friends and I never believed him but seeing now that this happened, and meeting all these people, yeah he wasn't lying. He met many people," his son said.

The suspect's mother spoke to Action News earlier this week to say her son has some good qualities, despite the charges he's facing.

"He has an anger issue but he's not a violent person. I know he would never take somebody's life. I raised him to respect life not to destroy it," said Marisol Flores, Rangel's mother.