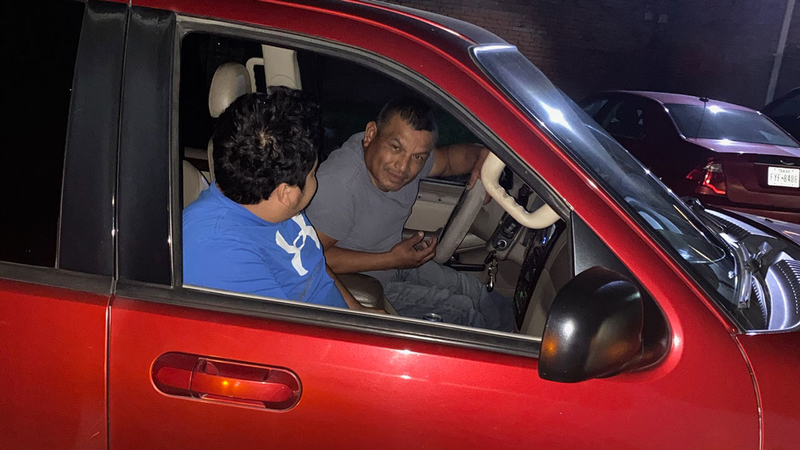 HOUSTON, Texas -- Houston police are asking for help in identifying the suspects wanted in connection with the death of a tow truck driver.

The incident happened around 9 p.m. on Wednesday in the 200 block of West Little York Road near the North Freeway.

Police say 48-year-old Augustin Martinez was giving a ride to a customer when he got into an altercation with two men in a red Ford Explorer at an apartment complex.

During the altercation, police say one of the suspects pulled out a gun and fired multiple shots at the wrecker, hitting Martinez and his customer.

Martinez attempted to leave the area but crashed his vehicle and died at the scene. The customer was taken to the hospital in stable condition.

The photo released by police was taken by Martinez moments before the shooting, according to a release.

The suspects are believed to be two Hispanic men between 30 to 40 years old.

Anyone with information on the identities of the suspects is urged to contact police at 713-308-3600 or Crime Stoppers at 713-222-TIPS.
Report a correction or typo
Related topics:
houstoncar crashshootingphotoman shotman killedinvestigationcrash
Copyright © 2021 KTRK-TV. All Rights Reserved.
TOP STORIES
Merced teacher back home after battle with COVID-19
Looking back at the ups and downs of COVID in Central CA
24-year-old man shot in southwest Fresno, police say
What changes throughout Central California as state reopens
CA has reopened, but not everyone can go maskless
Suspect involved in standoff in Kings County identified
19-year-old arrested on arson charges for NW Fresno fires
Show More
What to expect from CA's reopening today
Newsom picks 10 winners of $15M to celebrate reopening
1 killed in shooting on Hwy 99 near Merced
Valley doctors discuss California's reopening
Valley travel industry shows signs of rebound as CA reopens
More TOP STORIES News