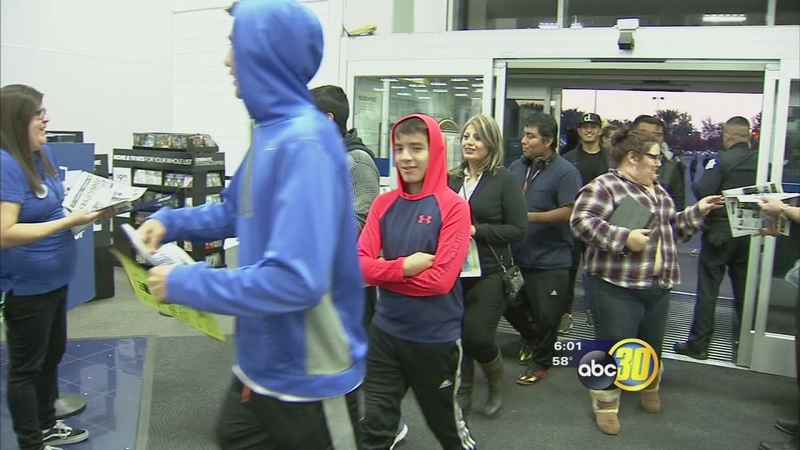 FRESNO, Calif. (KFSN) -- The biggest shopping day of the year may be winding down but there are still deals to be had. And when it comes to Black Friday, some shoppers have it down to a science.

"And then you get to receipt and you see how much you saved, so that's always fun too because we're obviously big bargain shoppers if were out on Black Friday," shopper Alexis De La Torre said.

Lines may not have been wrapped around River Park, but the line sure did form at Starbucks.

"Make sure you have that caffeine," shopper John Sanchez said.

Sanchez is a rookie when it comes to Black Friday shopping, but he had a game plan that started right after dinner.

"We've been up all night shopping," he said. "We've been to nine different stores, this is 10 now."

The fiance of the year braved the crowds at Best Buy, Old Navy and Ulta. He even made sure to be one of the first 100 in line at World Market to get a free tote for his bride-to-be.

"Where is she right now?" an Action News reporter asked Sanchez.

Some may be working off that Thanksgiving turkey at the gym, others are taking to the shopping aisles. Black Friday remains the busiest shopping day of the year, with the National Retail Federation forecasting 74 percent of holiday shoppers will hit the stores on Black Friday. Early birds took advantage of great savings at River Park.

"We actually got a Crock Pot and a Keurig," shopper Angie Rolon said.

"I'm getting an Apple Watch because it's a $70 discount," Isabella Zaayer exclaimed.

"Power Beats and a TV," were on Casey Chumley's shopping list.

In an exclusive Action News poll conducted by SurveyUSA, most Central Valley shoppers are spending about the same as they did last year.