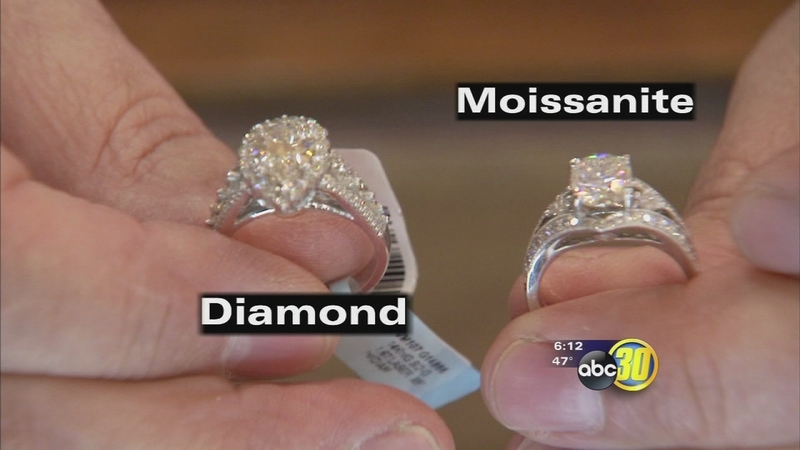 Sparkling, lab-created moissanite is intermixed inside an upscale shop display next to brilliant diamond jewelry and most people can't tell the difference.

"Often times they'll look at it, and it's very difficult for them to distinguish what's diamond and what's moissanite because it's that good," jewelry store owner Gary Yervan explained.

Yervan is the owner of The Vault in Fig Garden Village. The shop sells high-end jewelry, like a three-and-half karat diamond ring that goes for $90,000 or a $163,000 diamond ring. But he also sells moissanite.

"It's just amazing at how diamond-like the product is," he said.

The moissanite Yervan sells doesn't come from a mine. It's made by Charles and Colvard in Morrisville, North Carolina. The lab crystal is also known as silicon carbide.
Nathan Foster bought a moissanite ring for his wife, and he calls the gem eco-friendly.

"We're finding the millennial buyer is seeking us out," Charles and Colvard CEO Suzanne Miglucci explained. "It goes back to that concept that they're very educated consumers, so they're out there searching. They're doing their homework on the brands they want to align with."

"The millennials are not requesting moissanite," said James Orloff, who owns Orloff Jewelers in Fig Garden Village. His shop does not sell moissanite.

"When it first came out, it was a big fear to the industry that it would be the substitute that was going to create or stimulate a new type of business action to it," Orloff said.

But Orloff says that has not been the case. Customers overwhelmingly prefer diamonds.

"Just kind of explodes," Orloff said, looking at a diamond. "Nothing does that - not even moissan."

Upon closer inspection through a jeweler's loupe, you can see how moissanite can give off yellow flashes.

Yervan says some people prefer a pretty product at a lower price point so moissanite fits the budget.

"It serves a niche and a need," he said. "Mostly serves a need for that customer looking for the look but can't afford the larger diamond."

But both Yervan and Orloff agree diamonds remain a girl's best friend.