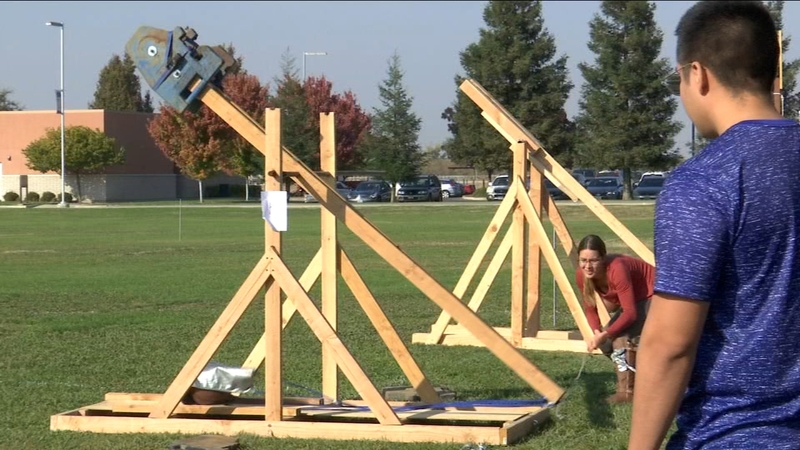 The idea, to create a siege weapon, launching a basketball to see how far they can get it to go.

"It's probably the best day of the semester for me. They are very clever," said Physics Instructor Lana Jordan.

Students apply what they learn in the classroom to create siege weapons that launch basketballs.

Jordan says the groups all passed but then they compete to see who can shoot the basketball the farthest.

"They come up will all kinds of tricks," Jordan said.

Students chose how they wanted to build their catapults.

Thomas Atienzo and his group chose a trebuchet style because they would get better distance.

"We started about a month, a month and a half ago that way we can go ahead and have room to dial in the details," said Atienzo.

And good thing they did, their first catapult didn't work out so well.

But they had time to rebuild, making it stronger, before putting it to the official test.

On Wednesday after each launch they would make small adjustments to shoot the ball farther.

"What we did. We added more weights. We adjusted the sling, got a longer sling. We also just reinforced it," said Atienzo.

The group ran into a bit of a snag at one point their ball went straight up.

They had to quickly figure out what went wrong.

"The best thing I see is them during their problem solving right on the spot," said Jordan. "They have to be able to reach a certain goal and if they can't they have to go back to the drawing board and keep working and working."

A quick fix of their string holding the basketball did the trick.

One of their launches sent the ball over 50 meters.

Atienzo says he loves having hands on projects in class.