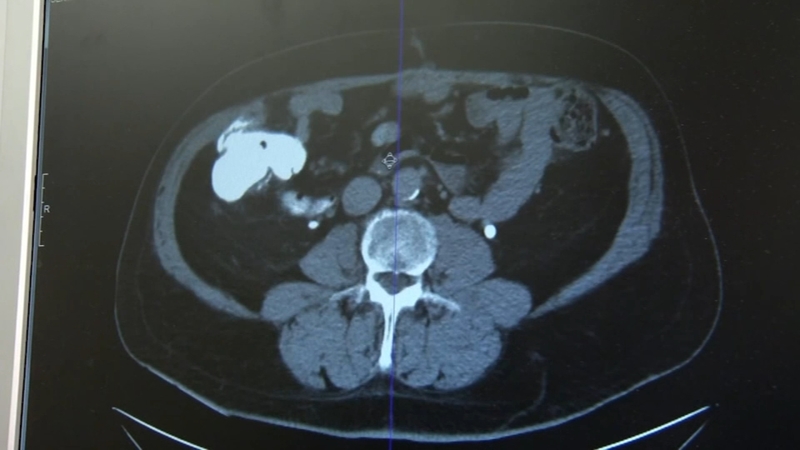 Signet ring cell carcinomas develop in the organs of the GI tract: the stomach, appendix, colon, bladder and pancreas. The cancer gets its name from the ring appearance the cells take on under the microscope. It's been historically tough to treat, but in select patients, surgery and a new method of delivering chemo have been making a difference.

Sixty-seven-year-old Jim Gibbs was working full-time and feeling healthy until Superbowl Sunday 2016 ... when he had a sudden pain in his left side.

"The next day I was attending some meetings and it was there, nagging," said Jim.

Jim's wife Carol Gibbs said, "There were no signs. No other signs."

A CT scan showed something unusual on his appendix. His doctor ordered more tests.

Jim shared, "He called me a week later and said, well, it's cancerous and it's signet ring cell cancer."

Dr. Gushchin explained, "By the time a typical diagnosis of a signet ring cell carcinoma of the stomach is made, the entire stomach is engulfed in tumor."

Jim said, "They hook you up to a pumping system that pumps in heated chemotherapy and it bathes the entire abdominal cavity, and then they pump it out."

"I can look back and say you know I spent that time in the most life-giving way I could," Jim said.

Jim finished his treatment more than two years ago, and he remains disease-free. Doctor Gushchin cautions even with the addition of HIPEC, the cancer is still tough to wipe out. Gushchin says patients who do best with this treatment have no nodes involved and have the tumor contained within one of the organs.