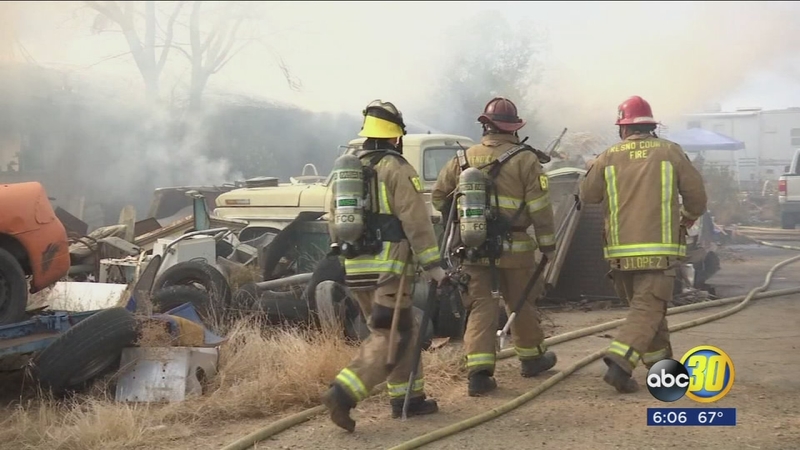 FRESNO, Calif. (KFSN) -- At about 11 a.m. on Thanksgiving, a fire tore through a Sanger home near the intersection of East Kings Canyon and Newmark Avenue. Quickly neighbors sprang into action to help the elderly man inside the burning house while first responders were still on the way.

"I just live down the street and I saw smoke and I am pretty sure it was not a burn day and it was black, so I figured it was probably something bad," said Brian Cook, one of the men who helped rescue the man.

Cook was one of the people who helped rescue the homeowner. He said they tried knocking on the door, but when the man did not respond they had to take a different course of action.

"We went through the door and an old man was in there and we were like hey, your house is on fire, come out," said Cook.

The senior was the only one inside of the house at the time. As people helped get him to safety, Cook helped rescue his 9-year-old Great Dane Apollo.

"I pulled the dog out again and he ran back in the house and I see the walls start smoking in the house," said Cook. "I thought the dog was not going to make it, so I picked him up and ran him out," said Cook.

Firefighters said the cause of the fire is still under investigation, but the homeowner says he has an idea of what might have sparked it. He says he was smoking a turkey in his backyard, while he was inside taking a nap.

"We see fires every Thanksgiving from turkeys to grease fires in the ovens," said Dennis Smith Cal Fire Battalion Chief. "Make sure you are paying attention and being careful."

No one was hurt in the fire, but the home is a total loss. One of the man's other dogs is still missing. It is unclear if the dog was inside or outside of the house at the time of the fire.

The man is being helped by the Red Cross and will spend the rest of his Thanksgiving with his wife at her retirement home.
Report a correction or typo
Related topics:
sangerholidayfirethanksgivingturkey
Copyright © 2021 KFSN-TV. All Rights Reserved.
THANKSGIVING
When to watch your favorite holiday specials on ABC
Task force says to 'assume you became infected' over Thanksgiving
Gov. Newsom considers stay-at-home order for most of CA
Amid COVID-19 travel warnings, LAX busy over holiday weekend
TOP STORIES
California to require health care workers to be vaccinated by Sept. 30
Woodville murder victim protected sister before shooting
32-year-old dies after crash at Fresno County auto dealership
No charges to be filed against Central Unified superintendent
Flags stolen outside of Fresno's Veterans Memorial Auditorium replaced
NE Fresno homeowners allowed to sue city over 'tainted' water
Clovis police adding new tool to get drugs off the street
Show More
Federal relief promised for CA farmers impacted by drought
Have Type O blood? Central CA Blood Center needs your help
COVID cases on the rise across the Central Valley
Moderna COVID-19 vaccine remains 93% effective at 6 months
Fire burns through vehicle storage yard in southeast Fresno
More TOP STORIES News