4 killed, 14 others trapped in recent snowstorms at California ski resorts 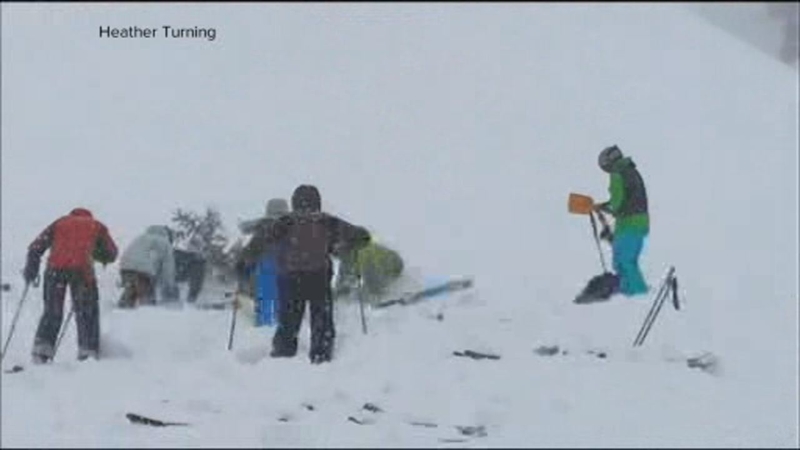 SAN FRANCISCO -- Tragedy strikes the slopes as winter conditions prove deadly at California ski resorts. So far, four people died and at least 14 others have become trapped in the snow since Thursday, according to authorities.

A mother and son from San Francisco are the latest to die in a ski resort accident near Lake Tahoe.

The two were found buried under three feet of snow near the Kirkwood condominium complex where they were staying. Deputies believe snow slid from the roof and covered the two.

Photos from the Alpine County Sheriff's Department show just how much snow there was in the Sierra over the weekend.

It led to an avalanche at Squaw Valley and while five people got trapped, they survived. However, a snowboarder who was reported missing during a blizzard at Squaw Valley was found dead on Friday. The dangerous winter weather also claimed the life of a second snowboarder at the China Peak resort near Fresno.

Officials say the man was off the groomed run when he fell head first into deep powder and suffocated.

An avalanche buried another popular ski area in Mammoth Mountain near Yosemite on Saturday. A skier on the chair lift shot video just before it happened. In the video you can see, two skiers and six employees who were partially buried. There were no serious injuries.

And a 5-year old girl is recovering after she was nearly strangled after falling from a ski lift in Southern California. The girl slipped off her seat on the lift over the weekend at Bear Mountain Resort, but her ski instructor grabbed her by the hood of her jacket and held on for over a minute. The girl was then caught by bystanders with a tarp.
Report a correction or typo
Related topics:
weathersnow emergencylake tahoesnowsearch and rescueavalancheblizzardski resortssierra nevadacaliforniasnowstorm
Copyright © 2021 KGO-TV. All Rights Reserved.
CALIFORNIA
Tesla officially moves Palo Alto headquarters to Austin
Costco and Sam's Club's secret weapon: Cheap gas prices
California taxpayers could get a rebate amid predicted budget surplus
Toontown at Disneyland closing until 2023 for complete redesign
TOP STORIES
1 killed, 3 injured in Fresno County crash
Woman injured in crash down embankment in Fresno County
Hwy 152 in Madera County closed following multiple crashes: CHP
Fresno police reform: The department's new policies explained
Fresno family's apartment robbed after fire displaced them
Fugitive task force searches for parents charged in MI school shooting
Toys for Tots Marathon Weekend kicks off at River Park
Show More
Senator Padilla discusses infrastructure bill's impact on Central CA
Tulare County medical facilities receive millions in federal funding
Atwater woman receives national attention with Christmas lights
Hanford woman dies after being hit by truck
City OKs additional card rooms for Club One Casino
More TOP STORIES News