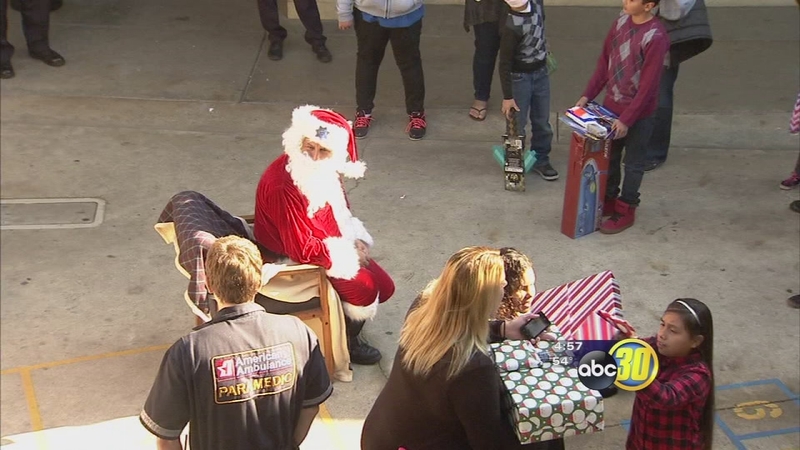 FRESNO, Calif. (KFSN) -- The countdown to Christmas continues, but Santa made a few stops ahead of schedule.

It may have been chilly outside, but Serenity and Karly Valadez were excited about their frozen Christmas.

"Beyond words can describe it right now-- I mean, I'm just excited that I'm able to spend this time with them," said Harley Miller, resident.

With a police escort in tow, Santa Claus himself traded in his sleigh for a ride with American Ambulance to deliver his gifts.

Around 130 children now have a present to open, and Santa may have the spotlight, but he definitely didn't do it alone. Santa's helpers started shopping at 5 Tuesday morning.

The Heroes And Helpers Grant made it so Fresno Police, American Ambulance, and Target could fulfill dozens of wish lists for children in emergency housing.

"They're actually saving up money to move, and this is a special time of year so it should be special for everybody," said Sgt Brian Valles, Fresno Police Department.

But not all eyes were on Santa, 8-year-old Julian Arreguin may be excited to open his presents but he's a bigger fan of his one of a kind experience.

"I got on the motorcycle and the police let me push a button and the lights turned on."

Heroes and Helpers is now in its 16th year. The children are nominated by police and firefighters from Fresno, Huron, and Firebaugh.