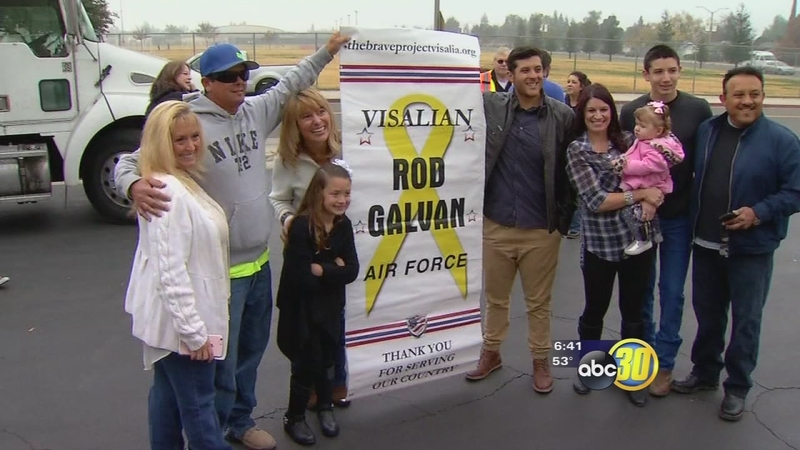 VISALIA, Calif. (KFSN) -- Rod Galvan was surprised with his name on a banner ready to hang in his hometown of Visalia. "Driving down the streets you can see everybody that's serving and has served."

Galvan's serving in the Air Force-- he hasn't been home in more than a year. He surprised his family last week, just in time for Christmas. Also perfect timing to see his name join the Visalia Brave Project. "I've never really had a banner up like that so it's pretty special knowing that everyone's going to see that I'm serving."

Akers Street in Visalia is filling up with banners honoring those currently serving in the military from Visalia. The Visalia Brave Project hung their 100th banner on Wednesday. "It took three years to get here, but we're here," says founder Gary Cole.

Cole started the project as a way to honor his own son. Now every couple of months he hands families in Visalia a new banner with their name and military branch on it. Fast-Signs donated their time to hang each banner.

"He's very proud to serve his country and was looking forward to this for a long time," said Debbie Vierra, son in Marines

Vierra's son Wyatt will also have a banner. Each one a small way Visalia can honor it's military families. "Our town's a big military town, there's a lot of people in the military," explained Galvan.

It's something Galvan watched in person rather than seeing a photo later. An experience his mom will always treasure. "I was really really excited knowing he was going to be here to hang the banner with us," said Lori Galvan, Rod Galvan's mom.

Lori is soaking in these moments with her family. Her son heads over-seas at the end of the month. "Since he's going to go overseas, that's weighing heavy on my mind."

After he leaves his banner will stay. Something Lori can look to daily when daily hugs aren't possible.

Banners cost $500. Families pay for $250 and the other half is paid for by donations.