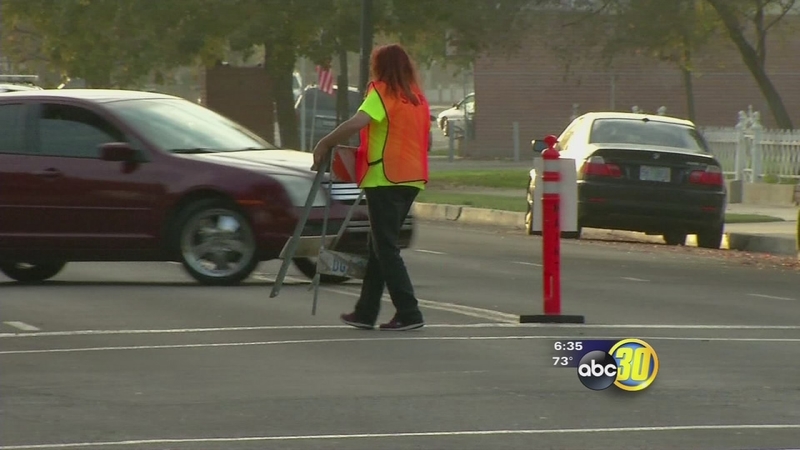 LEMOORE, Calif. (KFSN) -- There is a lot of leg work that goes into preparing for the annual Veteran's Day Parade in Lemoore.

The parade, which started when the sun went down, is sponsored by the City's Community Services Department and American Legion Post 100.

"I'm expecting that we'll have a banner crowd again. And then the weather is unbelievable," said Bill Overby, American Legion Post 100.

Megan Walker owns Lemoore Antiques and Collectibles. She will be open for business while the parade, including more than 40 floats, makes its way through downtown Lemoore.

Walker said it is a good family event, and a way to say thanks to veterans for their service.

"You can't walk up to everyone and give your personal thanks to every one of them because sometimes they're not in uniform or sometimes you just don't know. An event like this it's like everyone comes together to give their thanks at once."

One of those veterans not in uniform would be her husband, Kevin Walker.

Walker served in the Marines from 1989 to 1993 and was among the first US troops to land in Somalia during the conflict there. He said an event like Lemoore's parade is a reminder that there are still soldiers fighting on other continents. And a way to remember those who have served and those who have fallen.

"Take a moment, take a day, to remember the people who suffered so you didn't have to, you know? Right on."

Again, at least 40 floats will be on display for the parade, including one in memory of Otis Tolbert, the veteran and Lemoore High School grad, who died during the 9/11 attacks.
Related topics:
societylemoorekings countyparadeveterans day
Copyright © 2021 KFSN-TV. All Rights Reserved.
KINGS COUNTY
Looking back at the ups and downs of COVID in Central CA
Kings County hopes for boost in COVID vaccinations
COVID vaccine hesitancy: A roadblock to herd immunity?
Johnson & Johnson vaccine arriving in Kings Co. next week
TOP STORIES
LIVE: Putin addresses Russia after hours of talks with Biden
LIVE: Newsom speaks 1 day after CA reopening
Merced teacher back home after battle with COVID-19
Looking back at the ups and downs of COVID in Central CA
Arson investigation after fire burns 2 Fresno homes
24-year-old man shot in southwest Fresno, police say
What changes throughout Central California as state reopens
Show More
Tips for staying safe during a heat wave
Is being vaccinated a requirement for returning to work?
Fresno reopens public pools amid heat wave
Fresno police chief proposes $1.9M budget for department
Cooling centers open in the Central Valley
More TOP STORIES News