50 volunteers pick up trash in Fresno on Presidents Day

Volunteers spread out from areas ranging from southwest Fresno to downtown in District 3 to pick up trash.
KFSN
By Jason Oliveira 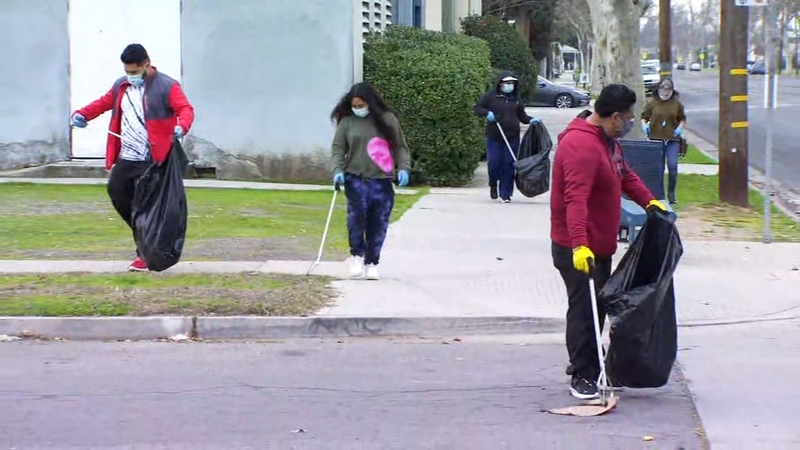 50 volunteers pick up trash in Fresno on Presidents Day

FRESNO, Calif. (KFSN) -- A group of Fresno volunteers spent part of their President's Day cleaning up parts of their neighborhood.

Momentum over a Beautify Fresno program seemed to be picking up.

Volunteers spread out from areas ranging from southwest Fresno to downtown in District 3 to pick up trash.

They came to spruce up the community and show a little pride in the neighborhood.

Community Engagement Consultant Kimberly Tapscott-Munson said, "This is awesome that they're actually taking their vacation and their holiday day to come out here and to be a blessing to our community."

50 volunteers took part in the cleanup, which included an area near Centro La Familia Advocacy Services.

The effort was part of the Unify Fresno initiative started by Mayor Jerry Dyer.

As word reaches community groups, many have been eager to help.

Beautify Fresno Director Mark Standriff said, "I think people are just tired of seeing all the trash around Fresno and they just decided, look if the city finally started caring about it well then I'm willing to step up too."
So many volunteers showed up, the group was able to extend the area where they picked up trash.

No doubt the work has been needed. Those who showed up just wanted to set a positive example.

Tapscott-Munson said, "Since the pandemic has hit, the debris has probably tripled so just looking about there's a lot of trash here, a lot of debris that's just thrown out of windows."

Mayor Dyer wanted the program to be extended in all neighborhoods around the city.

Standriff said, "We're going to go to every single neighborhood out there. We've got things planned for along Parkway Drive near Olive and 99. We're going to be in southeast Fresno along Kings Canyon coming up soon."