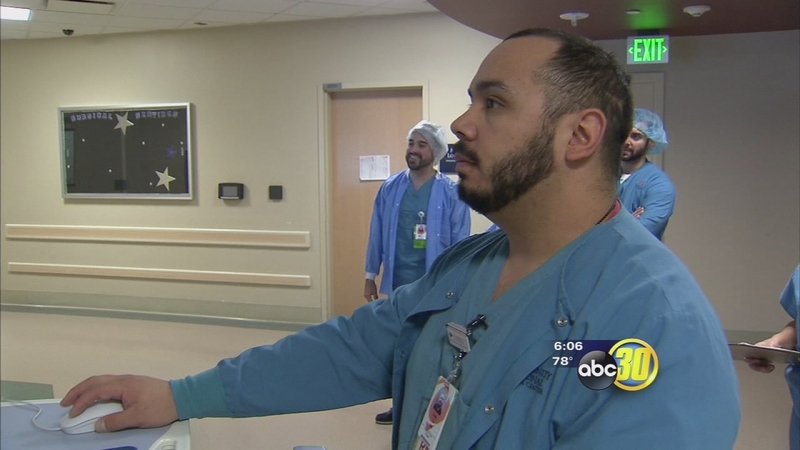 FRESNO,Calif. (KFSN) -- Jose Collazo makes a living helping others. The 30-year-old is a neuro nurse at Fresno's Community Regional Medical Center. A typical American, busy with everyday life, raising two boys with his wife Kathleen. You would never know it by looking at him but Collazo is lucky to be alive after surviving a bomb explosion in Iraq.

"In Iraq, I was scared every minute not knowing who, what, or when was going to happen."

Collazo spent eight years in the Army-- quickly rising to sergeant-- where he led a clearance unit who's mission was to search for bombs in Bagdad. Think of the movie the Hurt Locker-- until one day the vehicle he was driving hit a bomb sending him 150 feet in the air-- Collazo should have died.

"That day my two buddies came and got me. They cut me out of the vehicle and they drug me out while the firefight was going on. While the rest of the guys went to secure the area."

Collazo woke up 10 days later in a Texas hospital with major head trauma and was told he would never walk again. But after almost two years of physical therapy and persistence-- Collazo not only eventually walked again he would go on to graduate from nursing school.

"I was left on this earth to do something. And I think I found it-- I think is what I'm supposed to do."

Now, Collazo is helping others providing not just healthcare but also as an advocate for patients with brain injuries at CRMC.

"For someone who had neurological problems and was told I'd never walk again to be able to relate to these patients and help them. It takes one person to change somebody's life."

"Veterans Day to me is not only all those who have helped to protect this country but are currently fighting for this country."