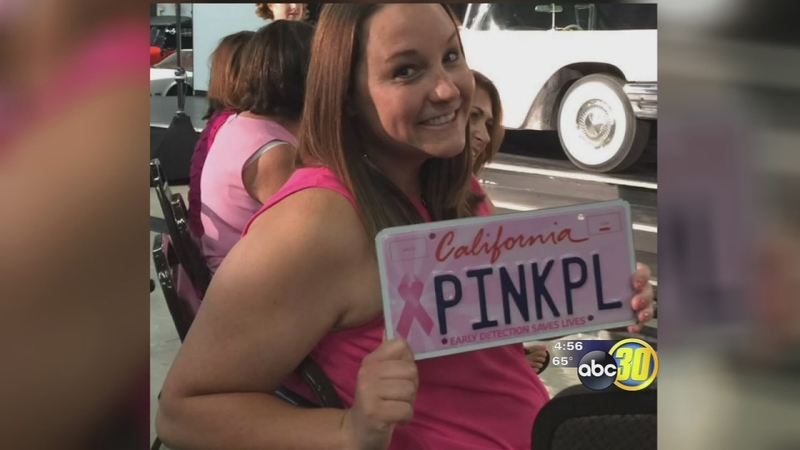 FRESNO, Calif. (KFSN) -- A group of breast cancer survivors is on a mission to raise awareness about the terrible disease with the help of drivers across California.

Heather Solari is a breast cancer survivor. She was diagnosed at the age of 25 and just a few months after she lost her mother to the disease.

After several chemotherapy treatments and surgeries, her cancer has been in remission for nearly four years, and Solari said support from women who had their own battles with cancer was a big part in her battle.

"The support group was amazing because telling a friend that has never had it or isn't going through it is a little different than being able to actually talk to somebody that knows what I am talking about," she explained.

Among that support group four other women who wanted to spread awareness about breast cancer.

"We were kind of sitting around one day and we saw a few other states had the plate and were like why doesn't California have one," Solari said.

The Pink Ribbon License Plate campaign was born. The women took the idea to the state senate and are in process of collecting 7,500 signatures to make it a reality. Solari said the goal is about early detection and saving lives.

"So, when you are driving down the road. I mean, even if a little girl my daughter's age says, 'Hey mom, look at that pink plate,' and hopefully it will trigger that they need to go get a mammogram," she said.

The president of the Fresno County Pink Heals chapter agrees and hopes it will create a new support network.

"It is an opportunity for those survivors or to support someone that's a family member that's been lost," Lisa Benham said. "It's an opportunity to talk about it and to show their support."