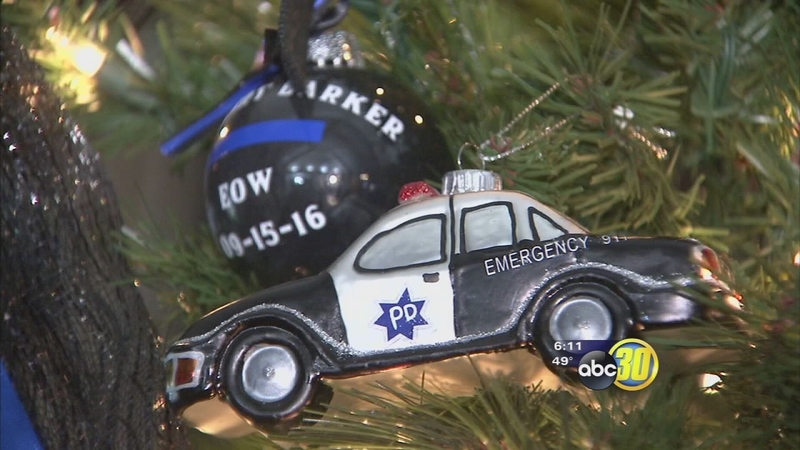 FRESNO, Calif. (KFSN) -- Families often pick a theme as they decorate their homes and Christmas trees. It's sometimes a specific color or maybe a Disney characters, but a Fresno Police detective is honoring fellow officers who won't be home to celebrate Christmas with their families.

The Christmas tree at Belinda Anaya's home instills a reflective, rather than a festive, mood. It's dedicated to those who dedicated themselves to serving the public and gave everything in the end.

"So, I decided to do a tribute to the fallen officers this year," she said. "It's been such a bad year in Texas and here in California."

There's plenty of blue, but the ornaments tell the story. Each one carries an officers name, a date and their EOW - end of watch.

"Too close to home, you know," Anaya said, looking at his ornament.

She was shocked to learn 138 officers have been killed this year in the line of duty. Natasha Hunter of New Orleans died when her cruiser was hit from behind.

"Hey, that could have been us," Anaya said. "That story, how that person passed away, it could happen to anybody."

So many officers have passed, the ornaments don't even fit on the tree. They hang throughout the living room. The ornaments bring into focus the dangers of the job.

Five officers lost their lives when they were ambushed in Dallas in July. Brent Thompson was one of them.

"You're not just putting a name," Anaya said. "It's somebody kid, somebody's spouse."

Anaya's nieces helped start the packing process. After the holidays, each ornament will be shipped to the officer's families around the country.

"I want them to know that they were in our hearts and prayers during the holidays," she said.

Jonathan De Guzman's family in San Diego will receive one. So will the family of Nathan Daniel Taylor, a California Highway Patrol officer who was hit by a vehicle while directing traffic in the snow near Donner Summit.