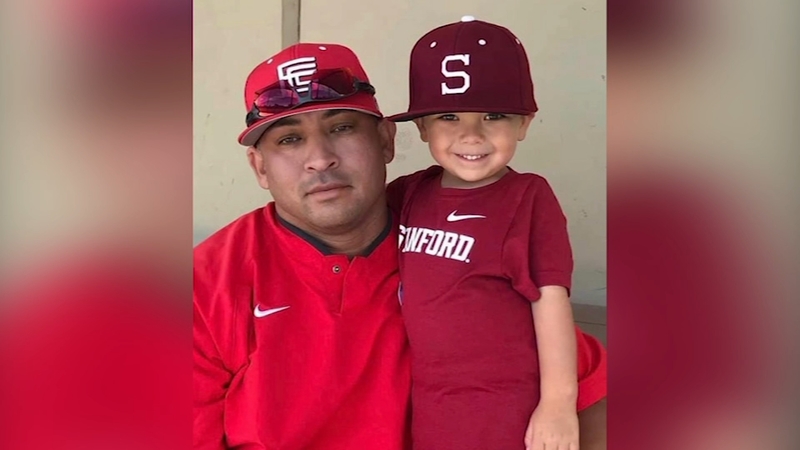 FRESNO, Calif. (KFSN) -- Coach Flores made a tremendous impact on countless student-athletes at Fresno City College and throughout Fresno Unified. Now he's being remembered as a role model, friend, and loving father.

The Fresno City Rams baseball team gathered for a tearful team meeting Tuesday to begin coping with the shocking loss of assistant coach, Sam Flores, at the age of 41.

"I've told everybody, hug your family. You try to be a tough guy, but as you get older you appreciate what's important," said head coach Ron Scott. "I'm going to tell them to love your family...if you want to do something in life, go do it."

Scott says messages of support have been pouring in from across the country. Flores was flown to UCSF Medical Center after suffering a brain aneurysm on Monday.

The Fresno City Soccer team stopped by to share their condolences as well.

"He was just super with the kids. I've probably had 200-300 people contact me. Former players, current players, players' parents, on what he's meant to them," Scott said.

Flores also worked as a full-time physical education teacher at Hoover High and served as head coach there from 2009 to 2015. His 2014 team won the school's first baseball league championship in 39 years.

He also previously served as an assistant coach at Edison High and Clovis West.

Fresno Unified released a statement saying in part, "He gave his best for students every day, and his sudden passing leaves a large void for those who knew and respected him."

"It just hurts. It's not just losing a coach, it's like losing a family member," said Fresno City pitcher Mikell Chavez. "He was that guy who taught you life lessons and was always there for you no matter what."

Flores is also being remembered as a loving husband and father of two. His young son was a fixture at John Euless Ballpark and often ran down the fence line to cheer for his dad.

"This is tough. It's a hard loss. He was a big part of this program," said Rams pitcher Darren Jansen. "The only thing we can do now is work hard because I know that's what he would want us to do."

The Rams plan to dedicate their season to Number 9 and will hang his jersey in their dugout during every game.

Members of the coaching staff here at FCC have started a GoFundMe account to support the Flores family and plan to create a college trust for his young son.