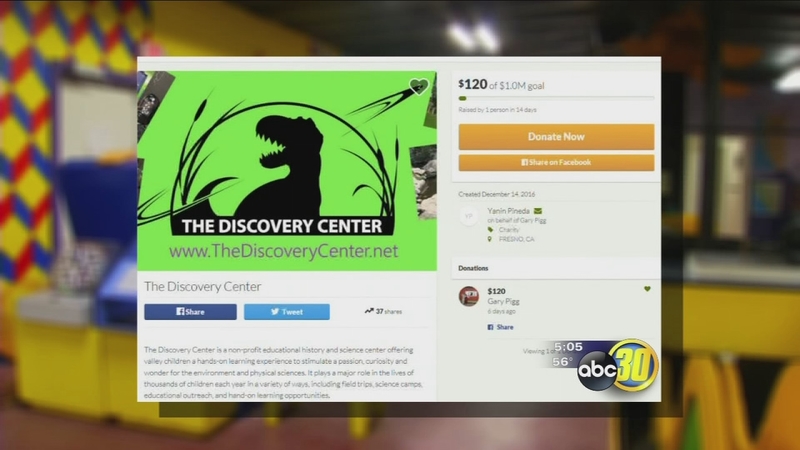 FRESNO, Calif. (KFSN) -- The sound of learning and the faces of young children are a constant sight at the Discovery Center in East Central Fresno.

"It's nice to be able to interact and talk with them about things. It's amazing what they pick up," said Carey Hartsock, parent.

Other local parents in the Moms Club of North Fresno have made it their mission to bring the more than 60-year-old museum up to date.

"Other cities smaller than Fresno have modern updated museums and this museum has a lot of potential, it just needs some extra help to bring it into the 21st century," said Brooke Nelson, Moms Club of North Fresno.

Nelson said the Moms Club of Fresno has launched a one million dollar campaign on GoFundMe for the Discovery Center. The group has raised $33,000 but is hoping the community will also help.

One of the ideas is to bring a dino dig to the center.

We got a look at some of the other plans, which include an ag component and grocery store.

"It's kind of like a farm to table kind of thing to let the kids know where their food is coming from," said Neal Bourzac, the Discovery Center Education Coordinator.

Borzack said these updated features would allow more hands on learning in the math and science realm.

"Things that you really haven't seen before-- there are some that are supposed to go inside that are water feature exhibits that explain water shed and evaporation in the Valley."

There are also plans outside for the center-- everything from expanding the water features to creating a trike track for kids to ride around.

Work could begin this year and if all the money is raised, the projects would be completed in the next five years.

A shuttle play structure will soon be moved to make way for the renovations at the Discovery center.