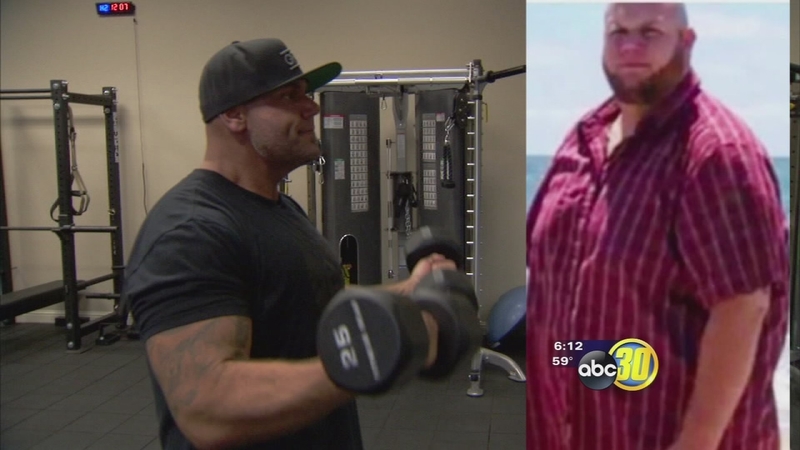 FRESNO, Calif. (KFSN) -- One man's journey to lose an extreme amount of weight and live a healthy lifestyle has turned into a booming business.

He's a self-described smart mouth with bulging biceps, and John Gianndrea looks like someone you'd find in a fitness magazine. We're talking muscles on top of muscles, but you would never guess what he looked like before.

For most of his life, John was severely overweight and, at one point, was at almost 500 pounds.

Making the decision to drop fast food and lift weights instead wasn't easy after years of bad habits, but he made the turn-around after an incident in which his sheer size stopped him from helping someone he cared about.

John's journey began four years ago when he was at 485 pounds and he couldn't fit in a doorway to help a friend who had passed out in his bathroom. Following that traumatic experience, he decided it was time to make a change. It was a change that has reshaped his life.

He lost 225 pounds in 15 months by exercising every day, and he combined it with a diet made up of mostly fiber, fruit and protein.

"It was simply, 'I don't want to die without achieving something great,' and that's what started my motivation," Gianndrea said.

"It's a mental battle. It's more mental than it is physical," Gianndrea said. "Losing the weight was hard but keeping it off and reminding yourself why you're doing it, it's all mental."

Gianndrea says he's done it all naturally - no surgery, no steroids, no excuses - just grit and determination.

"Creating a habit and a different habit from eating terrible and not caring about yourself to a complete habit of actually caring about your life, it's a huge a thing," he said. "And I had to teach myself first before I could teach somebody else that."

True Grit opened last summer and John says business is thriving. Clients of all shapes and sizes come here to train with a guy who's not afraid to get in your face to push you.

From Fresno to London, John's story has motivated people all across the world and thousands of followers have helped make him a social media rock star.

"He has so many followers and people that look up to him and, honestly, it makes me want to cry," said Jena Schwoob, who is John's fiance.

"It was really difficult honestly, but I love him so much and you just don't give up on somebody," she said.

John maintains he's still the same guy, just about half the size he once was. The only difference is he's healthier and happier.

"To make being big a temporary thing, it's not a forever thing," he said. "You get so down on yourself that you think you're just going to die fat. You don't have to you really don't. You can live a healthy life if you choose to."