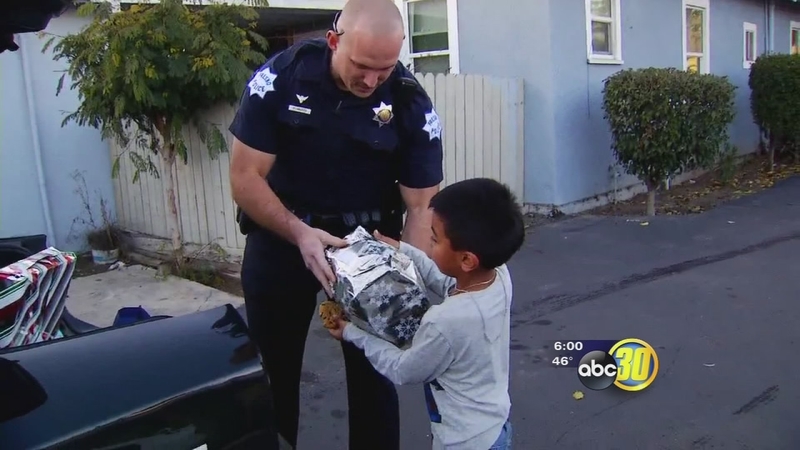 FRESNO, Calif. (KFSN) -- Central Valley families are feeling the joy of giving after dozens of Fresno Police officers spent Christmas Day handing out gifts to people in the community.

While most of the gifts were donated to the department, some were purchased by the officers themselves. And some of the kids said the surprise gifts they received were some of the best presents they got.

It was a Christmas day ambush Sunday. Fresno Police officer Pierce Masse patrolled the streets of his southeast district like he usually does,
but, on this day, he was surprising families with a Christmas offering.

The Travis home was one of his first stops, and mom Desiree was caught off guard. And she was even more surprised to learn that he was there with presents for her children.

"I'm very grateful," she said. "I can't be more grateful than I am right now."

Travis says her husband recently passed away, and because of that, she wasn't able to give her family much.

"I used a lot of the money I received from my husband's death to pay off bills and our home off," she explained.

Micah, 11, says he cannot thank officer Masse enough for what he did.

"I feel happy that he took the time out of himself to come over here and give us some stuff," he said.

Other officers across the city of Fresno did the same and surprised families with gifts on Christmas Day.

Masse says he did this because he wants the community to look at law enforcement in a different way.

"It's these one-on-one contacts that really make an impact on a lot of people," he said. "Put some of that negativity out of their mind and think this can be a positive contact."