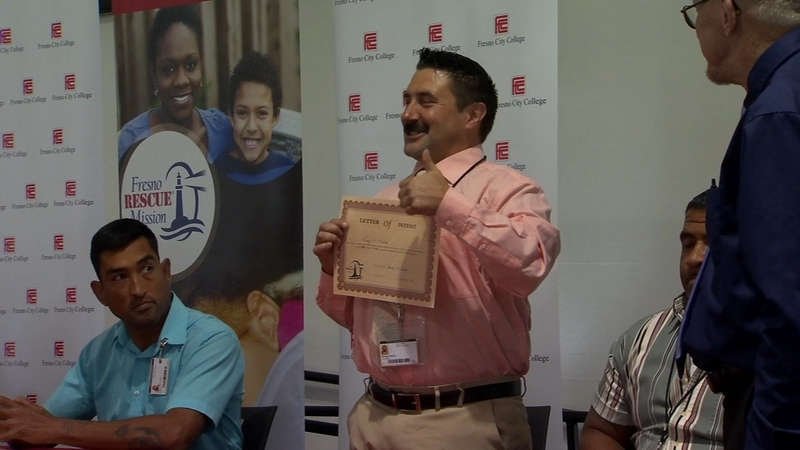 FRESNO, Calif. (KFSN) -- Signing day is a time many student-athletes put pen to paper and announce which college they will play for and attend.

But at the Fresno Rescue Mission, signing day represented a big step towards independence. A signature served as a sign for people ready for a fresh start at Fresno City College.

Supporters chanted, "You are a college student!"

Those were powerful words for a guy like George Madrid, who was living on the streets 14 months ago.

"I was an alcoholic, and I was using methamphetamine," he said.

Madrid credited the Rescue Mission for turning his life around. He got his GED, and now he'll attend Fresno City College.

"God is really in this place to change the mind frame of our situation and to know we have a future and a hope," he said.

18 months ago, Elliott Brown's son found him living on the streets in San Jose. He brought him home and took him to the Rescue Mission to get cleaned up.

Elliott now sees education as a way to change his life.

"You know what, I want to get into automotive because I like to take things apart and put them back together so I'll probably go into that," he said.

The Rescue Mission has now been certified to enroll these men at Fresno City College after they finish an 18-month program. The program led to their moment of signing a letter of intent.

"Just seeing each of them being so appreciative as they came by, it's just one of those moments where it's like OK, this is a highlight of my career," said Dean of Student Success Donna Cooper.

Rescue Mission CEO Matthew Dildine told us the ceremony was held to celebrate their transformation.

"We literally had guys sleeping on the street, smoking things they shouldn't smoke and just living lives of brokenness, and now they're college students," Dildine said.