AP
By JOSEPH B. FREDERICK and DAVID RISING 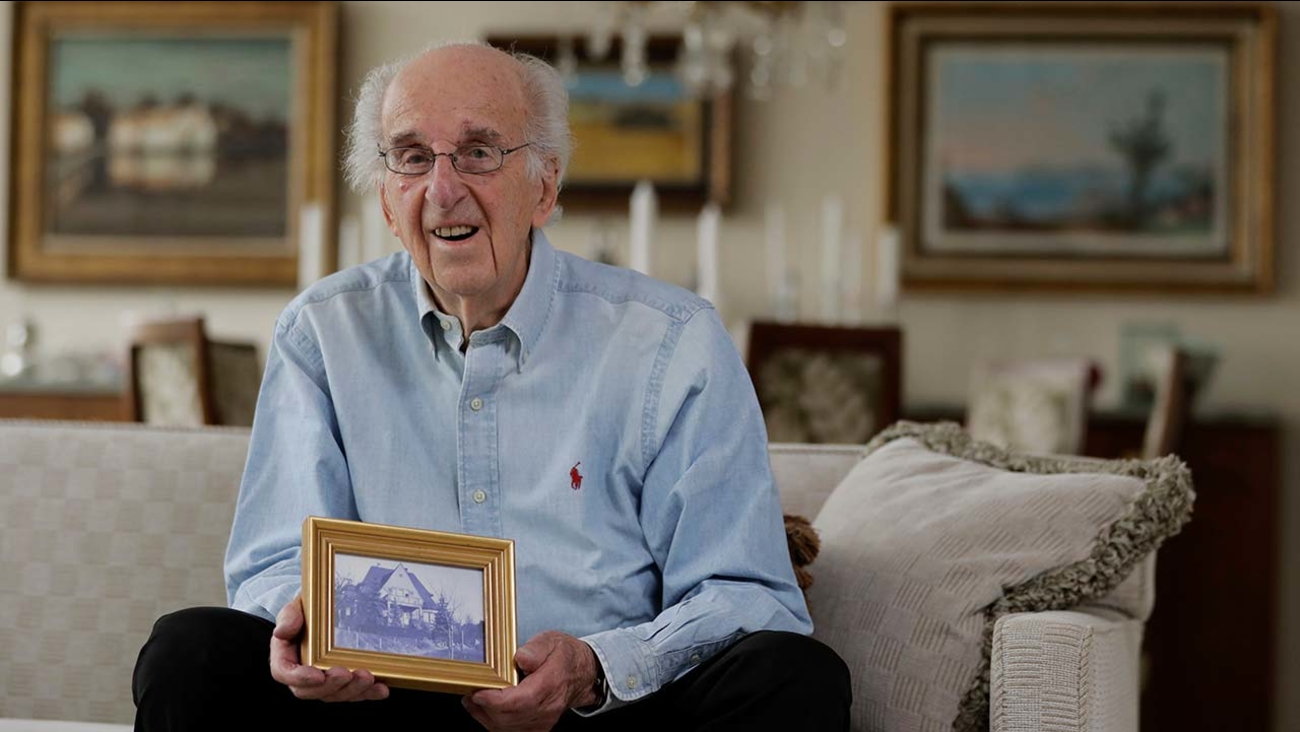 The 92-year-old started to cry as he read a three-page letter, neatly printed in blue fountain pen, which arrived out of the blue from Nuremberg (AP Photo/Julio Cortez)

MAPLEWOOD, New Jersey -- Peter Hirschmann has often recounted his own story of fleeing Germany as a teenager to escape Adolf Hitler's persecution of the Jews, then joining the U.S. Army to fight the Nazis.

But the 92-year-old started to cry as he read a three-page letter, neatly printed in blue fountain pen, which arrived out of the blue from Nuremberg and stirred very different thoughts of his past. 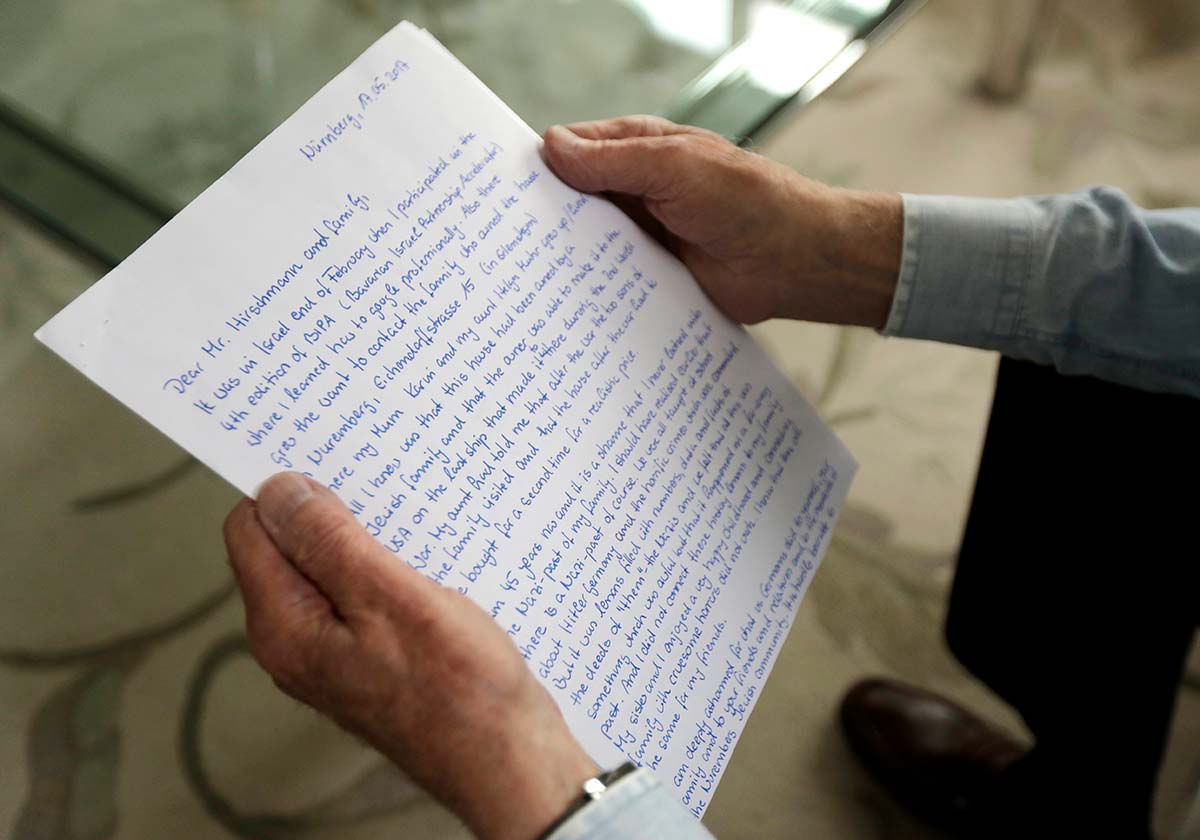 Its author, Doris Schott-Neuse, told him how her grandfather had acquired Hirschmann's family home under the Nazis. (AP Photo/Julio Cortez)

Its author, Doris Schott-Neuse, told him how her grandfather had acquired Hirschmann's family home under the Nazis, expressing her shame and imploring him for forgiveness.

Spurred to look into her family's past after helping a friend dealing with traumatic issues related to her own, the 46-year-old civil servant was shocked to find the family narrative she'd believed for years was a half-truth at best, and felt compelled to reach out to the elderly man in Maplewood, New Jersey, near New York City.

"I am deeply ashamed for what us Germans did to yourself, your family and to your friends and relatives and to the members of the Nuremberg Jewish community," she wrote. "It is hardly bearable to start thinking about the details - what a horror and nightmare it must have been to live through this."

Included in the envelope were photos of the Hirschmann family home today.

"I teared up because it brought back to mind all of those memories of mine," Hirschmann recalled in an interview.

The home is a stately building on the northeastern outskirts of Nuremberg, on Eichendorffstrasse 15.

"It was probably one of the nicer homes around according to the standards of the day," Hirschmann said. "Of course things have changed; it wouldn't rank as one of the great mansions that you would see, but at the time it was a really lovely place."

He also remembers how his parents set up sprinklers for him and his friends after the Nazis came to power and steadily removed of Jewish rights - like at the local public pool.

"All of a sudden there was a sign up there: 'Juden und Hunde Verboten,' which means Jews and dogs not allowed," he said.

Schott-Neuse has little memory of the home itself. Her aunt inherited it in 1969 after Schott-Neuse's grandmother died, and Schott-Neuse was 5 when her aunt sold it. She has vague recollections of Easter egg hunting in the garden and her aunt's small black-and-white television.

She didn't know either of her grandparents, and she'd never asked a lot of questions. From her aunt, she learned a vague story about the house.

"She told me there were Jews who were the owners, who were able to escape to the United States and my grandparents helped them,' she recalled. "I don't know if I want to believe that any longer. The letter was not only telling the family I was very sorry, but it was also searching for what was going on." 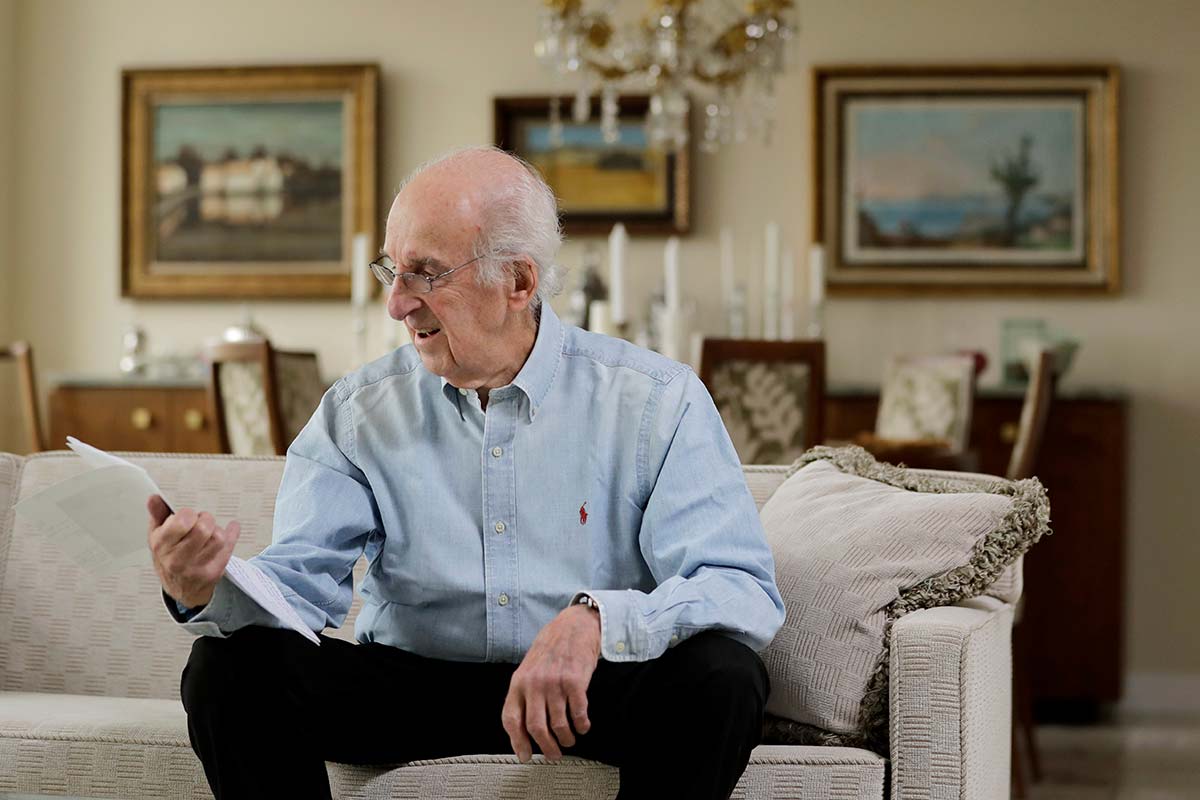 She didn't know either of her grandparents, and she'd never asked a lot of questions. From her aunt, she learned a vague story about the house. (AP Photo/Julio Cortez)

The medieval Bavarian city of Nuremberg was an early Nazi hub. It was at a rally in 1935 that the Nazis announced what became known as the Nuremberg Laws - revoking the citizenship of Jews and excluding them from many walks of life.

At that time, Hirschmann's father, Julius, was a successful businessman with a two-story, three-bedroom house in the suburbs.

By 1938, the so-called "Aryanization" process was in full swing, as Jewish businesses and properties were taken over by non-Jewish Germans, in the prelude to the full-scale mass murder of some 6 million European Jews several years later.

As Schott-Neuse combed through property registers in Nuremberg's city archives, she uncovered documents showing how the Nazis had methodically and bureaucratically seized the Hirschmann's home. By 1941, it was listed as being owned by by Muhr W., salesman.

"I thought he bought it directly from the Jewish owners but this doesn't seem to be true," she said.

Though she knows little about her grandfather, she assumes he must have had Nazi connections, since "it was a prime real estate area and you probably don't get this really nice house with a large garden," without any.

"That is what prompted me to write the letter, because I thought that the family also doesn't know what happened and I wanted to say I'm so sorry, because it's not done and over... there are Holocaust survivors still living," she said.

After the war, Hirschmann's family was paid restitution, though because of the depressed German housing market, it was a tenth of what the home had been worth before.

Peter Hirschmann and his family managed to safely flee Nazi Germany before the outbreak of war in September 1939. They ended up in Newark, New Jersey, and started over.

By the time Peter turned 18, the U.S. had entered the war. He signed a waiver allowing him to be drafted even though he was still a German citizen.

As a soldier with the 78th Infantry Division, he saw his first major action in Belgium in December 1944, in the Battle of the Bulge.

Like thousands of other Americans he was captured, but as a German Jew, he was in unique peril. When his captors found out he spoke German, he bluffed, saying he learned it in high school. He survived the final months of the war in a Nazi camp.

"If he had found out my background I would have been shot without any explanation," he said.

He still chokes up remembering the young German soldier guarding him, who dug through his things and gave him a chocolate bar - and hope.

"He was my enemy, and he treated me like a human being," Hirschmann said.

More than 70 years later, when he received Schott-Neuse's letter, he accepted her overture without hesitation, telling her by email it was particularly touching "because it is obvious that you, too, are suffering and it pains me to think of that - you, who are blameless."

He told her that it would have been easy for her to remain silent. The two have been corresponding regularly, but currently have no plans to meet face-to-face.

"You were not satisfied with that and examined the depths of your heart to reveal the era's true impact. You had the option to ignore it and instead you confronted it," he wrote. "My tears reflect the fervent hope that the humanity, dignity, and compassion you have shown is shared by others of your generation and the generations to follow."