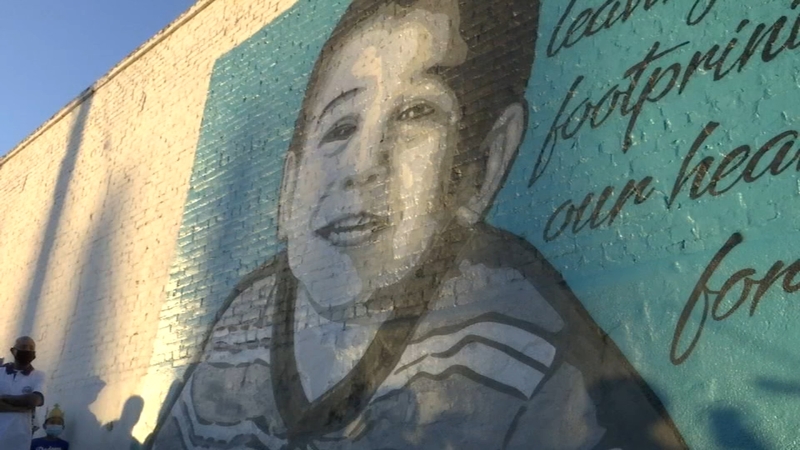 MADERA, Calif. (KFSN) -- Together, the city of Madera united as one Tuesday night to embrace a 2-year-old whose life was taken.

A few months ago no one in the crowd knew the name Thaddeus Sran, but now everyone is praying for him.

The two-year-old was reported missing from his home on July 15. On July 23, a cadaver dog found a burned body believed to be the toddler in an orchard west of the city.

"We never even knew him and we all love him," says Victoria Castaneda with group Justice for Thaddeus.

People from all over town gathered at an alley on Yosemite and D Street.

His exact image is frozen in time on the side of a building watching over downtown and all those who visit him.

There's also a quote reading, "A small life walked by, leaving footprints on our hearts forever."

"The quote signifies what he means to all of us pretty much," says the artist, Omar 'Super' Huerta.

A mariachi band sang to the child as people dropped off balloons, candles and stuffed animals.

Tony Camarena owns Don Tony's, where the mural was painted.

He says city officials along with the chief of police have personally thanked him for keeping Thaddeus' spirit alive.

But part of that history also includes the disturbing accusations against Thaddeus' parents.

On Tuesday afternoon, Briseida and Sukhjinder Sran were both charged with murder assault with force likely to cause great bodily injury resulting in death to a child under the age of 8 in court.

A group of Madera mothers have formed a group called 'Justice for Thaddeus' and vow they won't rest until justice is served.

"We're going to be there every step of the way, every court proceeding, anything that happens... we are going to be right there," says Castaneda, who is part of the group.