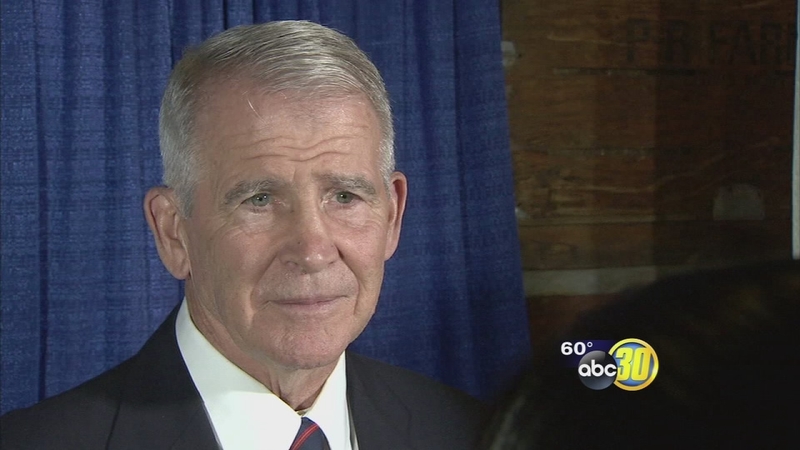 Speaking to veterans as well as non-military families, North took part in a solemn ceremony Thursday night that's rarely open to the public and was laid out for all to see.

As Marines past and present celebrated, the few, the proud turned 241 years young.

"It's something that is celebrated worldwide, whether it's combat or peacetime," Veterans Parade CEO Dan Payne said.

On the eve of the largest Veteran's Day parade in the country, hundreds of people gathered for the annual Marine Corps Birthday Ball. Those who gathered remembered those who died and witnessed a changing of the guard.

"For me, an older Marine, to be able to look at these guys and say, 'You know what, the Marine Corps is still intact. We have generations of hard chargers that will carry on the Marine Corps tradition," Payne said.

At a time of transition on Capitol Hill and extended conflict in the middle east many looked for guidance. And some found it in retired Lt. Col. Oliver North.

"Remarkably, in spite all of the challenges, they continue to come," North said. "And they came because they want to protect our country and I think it's a noble ideal."

Through pictures and stories, North shared the camaraderie, the joy and the pain of serving. Those who serve are sometimes lost and other times forgotten to outsiders.

"This is the longest war in history," North said. "I always thought the war I was in, Vietnam, was the longest war until this one came along. It's taken a terrible toll, more than 7,000 killed."

That loss never more clear than on this day as he reminded the crowd his highly decorated history of service was only built on the shoulders of other Marines and veterans.

"I don't know if they are inspired," he said. "But I'm inspired to be with them."
Related topics:
societyclovisclovisveterans daymarines
Copyright © 2021 KFSN-TV. All Rights Reserved.
CLOVIS
Clovis police arrest man for deadly hit-and-run
Man hit, killed by car while crossing Clovis street
BIG Hat Days is back in Clovis!
Clovis Big Hat Days to return this weekend
TOP STORIES
Merced teacher back home after battle with COVID-19
Looking back at the ups and downs of COVID in Central CA
24-year-old man shot in southwest Fresno, police say
What changes throughout Central California as state reopens
CA has reopened, but not everyone can go maskless
Suspect involved in standoff in Kings County identified
19-year-old arrested on arson charges for NW Fresno fires
Show More
What to expect from CA's reopening today
Newsom picks 10 winners of $15M to celebrate reopening
1 killed in shooting on Hwy 99 near Merced
Valley doctors discuss California's reopening
Valley travel industry shows signs of rebound as CA reopens
More TOP STORIES News