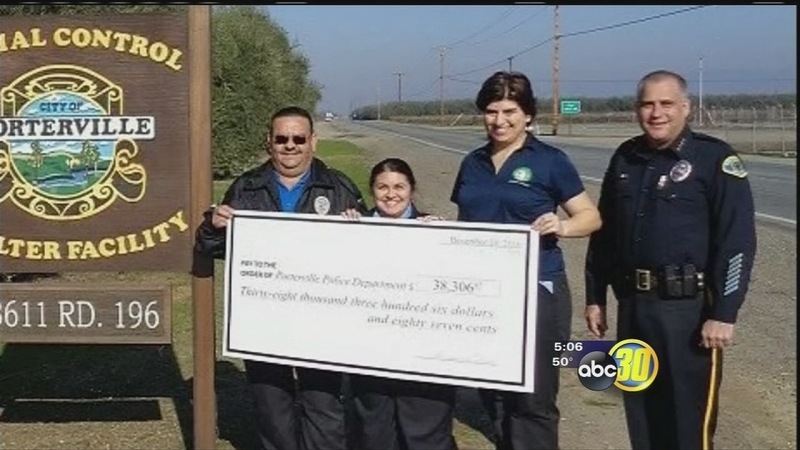 FRESNO, Calif. (KFSN) -- Porterville Police announced they'll be able to make some improvements and add another member to the force thanks to some anonymous donations.

The Porterville Police Department also operates the city's animal shelter. It's an old building, but now they'll be able to make some much-needed improvements.

Smiling faces were all around, as Porterville Police and Rescue from the Hart received large checks from an anonymous donor. The Los Angeles non-profit, which works with Porterville police on spay and neuter programs and finding animals homes, was given $25,000.

While the Porterville Police Department itself was gifted with a $38,000 gift from the same donor. Porterville police say $25,000 will go towards improvements and animal care at the city's shelter near Lindsay.

While the rest will be put towards the purchase and training of another police K-9, and another anonymous donor recently contributed $5,000 for the same purpose.

"We have those dogs available, not just for our department and our citizens but those surrounding agencies as well," Sgt. Rick Carillo with the Porterville Police Department said.

At the city shelter, one of the first priorities will be upgrading the kennels for the animals. So they can live comfortably until they move to their next location.

Porterville police are grateful, and though they respect the donors' anonymity. They still want to say a big, 'Thank you.'

"But we want to make it known publicly that there are good people out there," Carillo said. "They're helping in the aid of these animals and these dogs and cats at our shelter that we maintain."