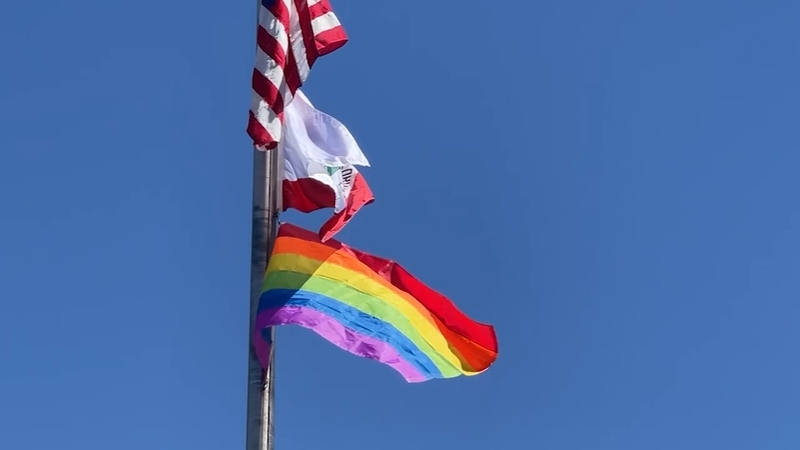 FRESNO, Calif. (KFSN) -- "That flag means we see everyone, we love everyone, and you're welcome here at Fresno City College."

For the first time since its inception in 1910, the Fresno City College campus now flies the Pride Flag. College President Dr. Carole Goldsmith says, "California's first community college has been serving everyone for over 100 years, that's including LGBTQ students. That's not a new concept here."

As the first openly gay president of the college, Dr. Goldsmith says raising the flag was deeply personal, adding, "I'm lucky to be here, and I'm lucky to be your president, and have gone through education, and be able to stand here today on a day I thought I'd never see."

Jennifer Cruz has lived most of her life in the Valley. While she says this is a step in the right direction, she says there's still work to be done.

Cruz says, "This flag-raising is a symbol of hope for our community. It's important this continue throughout the Central Valley. I was recently in Fig Garden Village where someone stopped me to tell me that I was breaking their god's rules by wearing a rainbow and it didn't belong to us and we need to give it back."

"We're behind the times, it's about time we see this flag flown at the colleges, at City Hall," she says.

Fresno Mayor Jerry Dyer was so moved by the day's event that he changed his stance on raising the Pride Flag at City Hall, announcing on Friday afternoon that he would support it.

"I want the LGBTQ community to know that I love them and I do stand with them and I'm confident we're going to get through this divisiveness in Fresno," said Mayor Dyer.

Two days ago, the State Center Community College District board of trustees, who are in charge of Fresno City College, unanimously passed a resolution formally recognizing the Pride Flag serves as a symbol of hope and inclusion for the LGBTQ+ community.

Board president Annalisa Perea says, "That really encompasses what we stand for at the district we are inclusive of everyone we have safe campuses here."