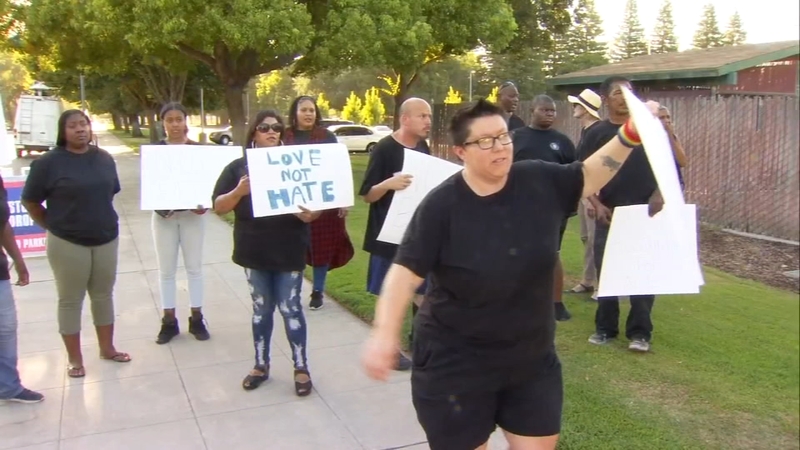 CLOVIS, Calif. (KFSN) -- Holding signs and wearing all black, a group of protesters stood in solidarity expressing their concerns about a Bullard High School cheerleader who was recorded on Snapchat wearing blackface and using a racial slur back in May.

"You're not going to sit up here and assault our ancestors and assault the world," Dr. Floyd Harris, a local pastor, says they are upset Fresno Unified School District did not remove the student from the team.

"You need to make an example out of this young lady that anybody using this word should be removed from a team," he said.

But inside the stadium, that cheerleader and the other cheerleader who hit record were not with their squad rooting on the Knights.

Instead, the district says they have been placed on limited performance for the start of the football season.

A spokesperson tells Action News the purpose of that is to make sure people at the games stay safe.

"The girls are technically still on the team

Community activists Stacy Williams has been vocal about this controversial incident since the very beginning.

She believes the disciplinary action taken sends the wrong message and said it explains why some were protesting Friday.

"It's not more of a consequence as it is for safety," Williams said. "Co it isn't something for other students if I did this what would happen to me what are the consequences it's more like we're going to take it week by week and see what happens."

Michael Cumming's daughter has been on the squad for two years. He said the entire situation has helped unify all of the parents and hopes everyone will learn and grow from what happened.