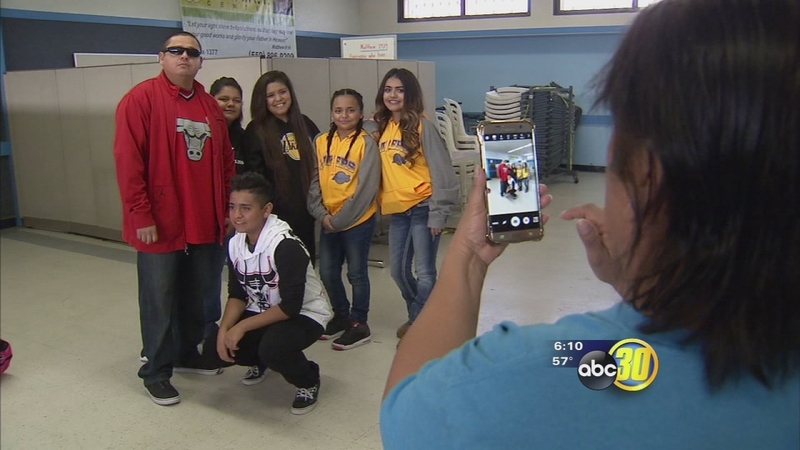 SELMA, Calif. (KFSN) -- One of the Valley's newest Boys and Girls Club is getting a special treat after the Los Angeles Lakers donated tickets for the kids to watch Sunday's matchup against the Chicago Bulls.

Inside the Boys and Girls Club in Selma, young enthusiastic basketball fans prepared for a trip of a lifetime.

"We all knew something was up because he seemed really thrilled about it," Mariah Naranjo said. "He came in and was like, 'Oh my God, we are going to the Lakers game,' and we were like, 'What?"

The journey for the 15 kids to the Staples Center started two months ago when Mark Armenta first applied for tickets off the Lakers' website. He thought the chances were slim and his request wouldn't be approved until late in season until he received a call.

"Actually thought one of my daughters was playing a joke on me," he said. "It didn't hit me until the lady fully identified who she was."

Armenta said the kids he watches over are from low-income and often dangerous neighborhoods. They come to the Boys and Girls Club for mentoring and guidance. He said providing them with this trip is a dream come true for him too.

"It gets hard for me because that's my job," Armenta explained. "I like what I do, and I like taking those type of children to these types of trips."

The community helped raise $2,000 dollars to cover food and transportation costs for everyone, many have only watched the game on TV and some like Consuelo Villasenor have never been to Los Angeles.

"People told me that it's a nice city," Villasenor said. "It's beautiful when it gets at night with all the lights on, I told them it might be gorgeous when I get there."

The kids got on the bus, some decked out in Laker gear others the Bulls, but no matter who comes out on top the excitement will likely last far longer than any disappointment.
Related topics:
societyselmafresno countygood news
Copyright © 2021 KFSN-TV. All Rights Reserved.
GOOD NEWS
911 operator meets NC mom, newborn she helped deliver
Ohio vaccination lottery winner wants to help others with money
94-year-old graduates from high school after dropping out during WWII
Mendota boy earns college degree, now graduating HS
TOP STORIES
Merced teacher back home after battle with COVID-19
Looking back at the ups and downs of COVID in Central CA
24-year-old man shot in southwest Fresno, police say
What changes throughout Central California as state reopens
CA has reopened, but not everyone can go maskless
Suspect involved in standoff in Kings County identified
19-year-old arrested on arson charges for NW Fresno fires
Show More
What to expect from CA's reopening today
Newsom picks 10 winners of $15M to celebrate reopening
1 killed in shooting on Hwy 99 near Merced
Valley doctors discuss California's reopening
Valley travel industry shows signs of rebound as CA reopens
More TOP STORIES News