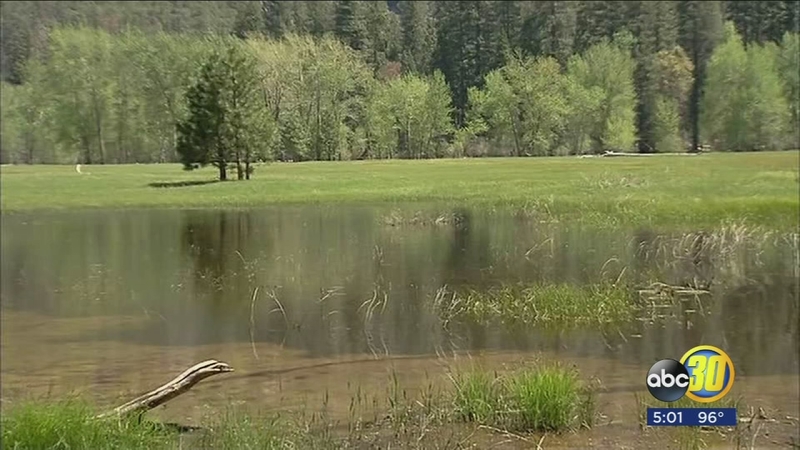 YOSEMITE NATIONAL PARK (KFSN) -- A spot to stop is hard to find at Yosemite National Park, as visitors from all over the world are passing by to see the roaring rapids and the dozens of waterfalls.

That's including water on the roads and in the fields-- Park officials said that water is because of snow melt. The national park is seeing a record amount of snow pack at least twice as much as a normal year.

"This year is bigger than the previous four years combined," said Gediman.

The recent heat is accelerating the snow melt and has caused the Merced River to peak past the flood stage on Wednesday morning. Park officials said they expect the water levels along the Merced River to fluctuate for the next several weeks. In the meantime, they have closed some campsites close to the river's edge.

The Merced Irrigation District said Yosemite's water will eventually travel south, and have already made plans on how to handle the incoming flow.

"We've known what kind of snow pack we're experiencing so the reservoir is down 66-percent to make room for that inflow, and most of the flow coming from Yosemite and down the river will be caught by Exchequer Dam at Lake McLure," said Mike Jensen, Merced Irrigation District.

While snow goes away, visitors will still come to play but park officials ask if they do-- stay safe, and enjoy the roaring Merced River from afar.

"What we want people to know is to just plan their trip accordingly and know what to expect," said Gediman.

The park is working on the culvert issues.