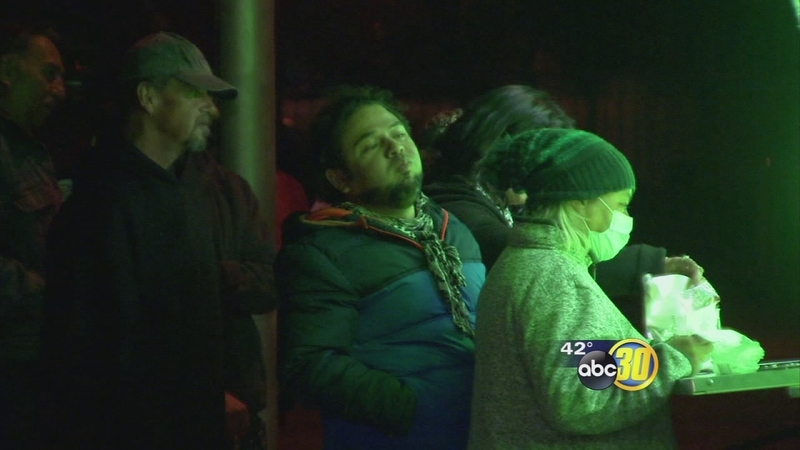 FRESNO, Calif. (KFSN) -- Throughout the night Thursday, as the homeless tried to stay warm, a group of people stepped out of their comfort zone to make sure these men and women had something to eat.

The collaboration involving the Fresno Grizzlies, Taco Truck Throwdown,and El Premio Mayor took over several parts of Downtown Fresno. We followed them around, as they made their rounds cooking up hundreds of tacos for more than 200 people.

The plate of food given by the volunteers was Ken McNiel's first hot meal of the day. The generosity, he said, touched him.

"This time of the year just opens up people's hearts and it's a shame it's not like this every day of the year."

Food was not the only thing handed out, sweaters and blankets were also given to those in need.

Event organizer Mike Oz came up with the idea, but he said it was a team of people who helped make it happen.

An act of kindness given to people who are looking for a reason to smile and be happy during this holiday season.

The owner of El Premio Mayor has donated food to the Povarello House during the holidays before. But this was the first time he actually drove his truck around to feed the homeless.
Related topics:
societyfresno downtownhomelessfresnotacostaco truck throwdown
Copyright © 2021 KFSN-TV. All Rights Reserved.
FRESNO
Valley companies look to hire, experience work shortage
George Lopez to bring comedy show to Fresno
Dozens help clean up at Camp Fresno
Bakery in River Park celebrates grand opening
TOP STORIES
Merced teacher back home after battle with COVID-19
Looking back at the ups and downs of COVID in Central CA
24-year-old man shot in southwest Fresno, police say
What changes throughout Central California as state reopens
CA has reopened, but not everyone can go maskless
Suspect involved in standoff in Kings County identified
19-year-old arrested on arson charges for NW Fresno fires
Show More
What to expect from CA's reopening today
Newsom picks 10 winners of $15M to celebrate reopening
1 killed in shooting on Hwy 99 near Merced
Valley doctors discuss California's reopening
Valley travel industry shows signs of rebound as CA reopens
More TOP STORIES News