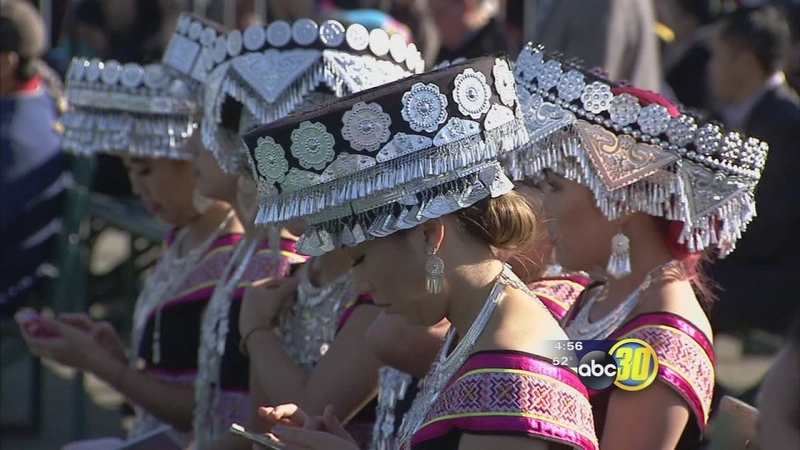 FRESNO, Calif. (KFSN) -- People from around the world are gathering in Fresno this week for the biggest Hmong New Year celebration in the world.

The Fresno Fairgrounds filled with the social event of the season. More than 100,000 people will walk through the gates over three days of the Hmong International New Year, celebrating traditions brought from the hills of Laos and Thailand.

From the courtship game of Pov Pob to the fancy costumes usually worn only once a year, the older generation is making sure the traditions carry on. And in the middle of the fairgrounds sits the man many of them credit for delivering the American

"Without him, we wouldn't have this opportunity to be here," said Christina Vang while looking at the statue of General Vang Pao.

Pao casts an oversized shadow over the celebrations. Five years after his death, many of the younger generation see his statue as their best chance to get a photo with a father figure. But as much as this is about tradition, it's all about commerce!

More than 200 vendors sell everything from the traditional costumes and music to flowers and medication to potato swirls and mounds of meat.

Tom Moua is one of many vendors who come from out of state to sell their products to a giant Fresno crowd. His Montana barbecue ribs and sausage are already award-winning on the barbecue circuit.

"It's that Asian flair, that's the secret," he said. "Asian ingredients are different. We're not the typical barbecue on the shelf."

Opening ceremonies included congressman Jim Costa, Fresno mayor-elect Lee Brand and police chief Jerry Dyer along with organizers like Rocky Vang who said this is the perfect way to bring a busy year to a close.