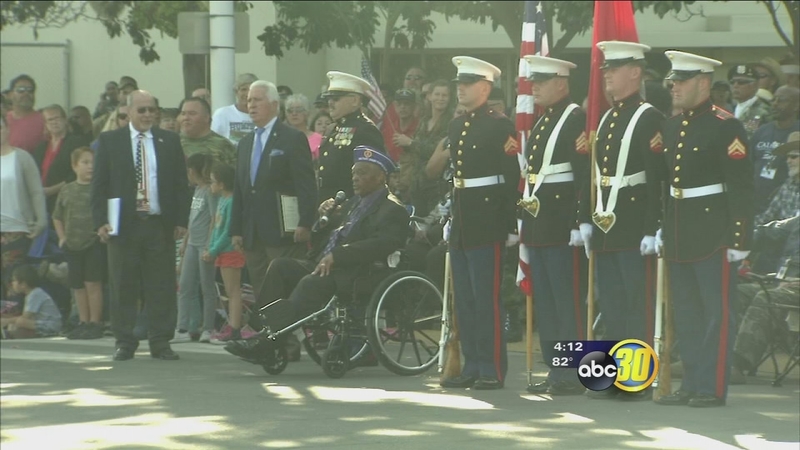 FRESNO, Calif. (KFSN) -- Veterans and community members gathered in Downtown Fresno as the 97th annual Veteran's Parade kicked off. With American flags waving the streets were filled with people paying tribute to those who have served our country and are serving now.

"It's like you can celebrate the military and the army," said Xzavier Montes-Meza, 7, Fresno.

Xzavier came with his father, dressed in his own military uniform. His father said he asks about the Veteran's Day parade every year.

"He loves coming to the Veterans Parade, he has cousins actively serving in the military right now as we speak," said Robert Meza, Fresno.

Students from Duncan Polytechnical High School were out in full force, not just watching the parade but spending several hours handing out 1,000 handmade thank you cards for veterans.

"We're a big club, we like to be everywhere, we like to make the veterans happy. It's a really nice feeling when you hand a veteran a card and say thank you for your service," said Jovanna Mejia, Duncan Polytechnical High School.

"I think it's a good way to show all the veterans, all the support, and give them the attention that they not only fought for us but they're really important to our country," said Natalia Moreno, Duncan Polytechnical High School.

Their teacher, Laura Walls, said the students are part of the medical pathway at Duncan and chose to be here as a service to the community.

"We want to show to veterans and our community that we're training students at Duncan to make a difference in the community."

So while the bands play and veterans march past city hall local students are not just watching but learning about the sacrifices made, the service that should be honored.

"I like coming out here because I learn about all of this in school and I just like seeing all the different Marines and everybody who supports us in America," said Amira Maldonado, 8th grade student.