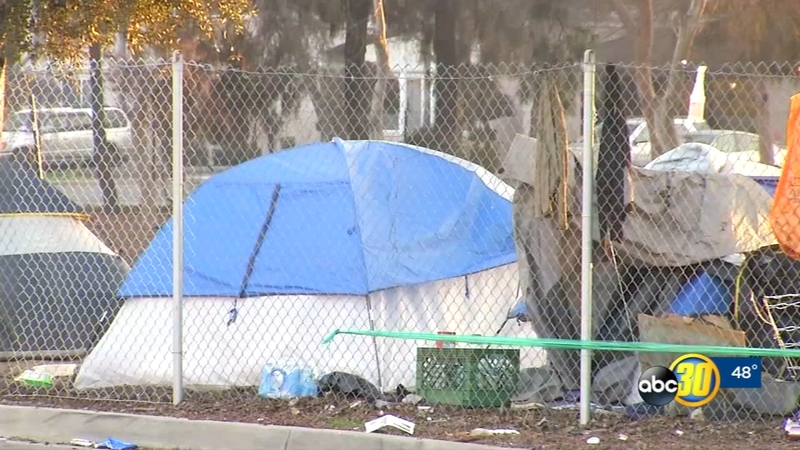 TULARE, Calif. (KFSN) -- The death of a homeless man in Tulare on Highway 99 on Thursday night has re-ignited safety concerns.

Several homeless encampments are set up on the embankment just feet from cars driving by.

It's a problem the city is pleading with the state to help address.

"What can we do to make this a better situation, to make sure no one else has to die?" says Tulare City Councilmember Jose Segala.

But nothing was done.

On Thursday night, a homeless person near those tent camps was hit and killed off Highway 99.
RELATED: Pedestrian killed after being hit by 2 cars while trying to run across Highway 99 in Tulare

"The governor said he would make Caltrans property available to deal with the homeless. We are asking him, we are pleading with him to make sure that he follows up on that," says Segala.

"We don't need to kick them out, we need to find a place where they can live - a small campground with homes, trailer houses," Perez says.

"These folks that are experiencing homelessness need to be protected also. I know that's not a popular view. They are citizens, they are struggling. It is not a good place for them to be along the freeway. In the same view, there are not many good places for homeless encampments to happen," he says.

Councilman Segala says the city has not yet received a response from the governor's office, nor Caltrans or California Highway Patrol. He said this item will be discussed at the next council meeting.
Report a correction or typo
Related topics:
societytularehomelesspedestrian killedfatal crash
Copyright © 2021 KFSN-TV. All Rights Reserved.
HOMELESS