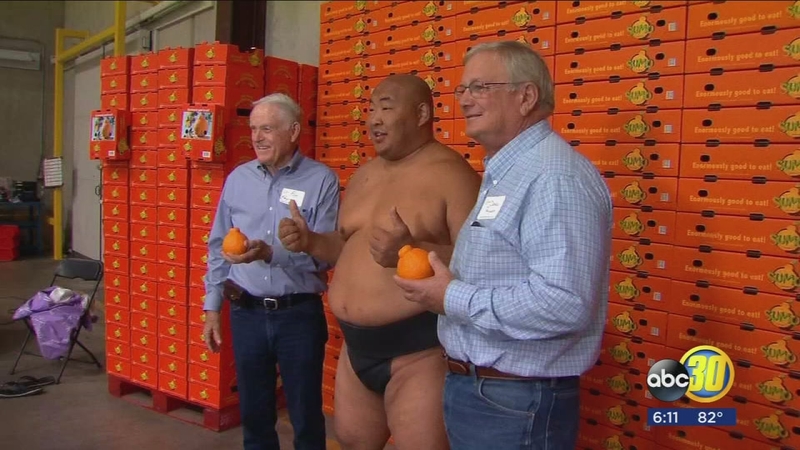 A South Valley company which developed a large, sweet Mandarin orange is digging in for a heavyweight fight for consumers. Sumo Citrus is now backed by a Sumo world champion.

The cross between a Mandarin and a navel weighs about a pound. In Japan, the sweet fruit called Dekopon can fetch a ridiculously high price.

Pretty amazing, you'll see $10 in Tokyo markets for this thing," marketing coordinator Seth Wollenman said. "So when we saw that over there we said there must be something behind this."

Local company Suntreat developed its own variety called the Sumo Citrus Mandarin. After wrestling with a decision over how to best reach an expanded market, the company decided to go big with four-time world Sumo champion Byamba.

"When you're in training, how many pieces of fruit could you eat?" an Action News reporter asked Byamba.

"Oh, I have no idea," he replied laughingly.

Local Sumo citrus growers met Byamba, sized him up and snapped photos with him. The champ will appear in ads when the fruit comes into season in January.

"We've had Japanese consultants come over to help us grow it similarly to Japan's methods, and they've commented that the Central Valley here in California is actually like a natural greenhouse," Wollenman said.

The 350-pound champion hails from Mongolia but he's become a Hollywood favorite, appearing in movies and ads including one in which he ice skates for Geico.

"I was in the "Ocean's 13" movie," Byamba said. "After that, I was in a lot of commercials, a lot of entertainment jobs in America and out of the country too. I love it."

"We're excited to have him here," Wollenman said. "He's toured all over the country and he knows the variety."