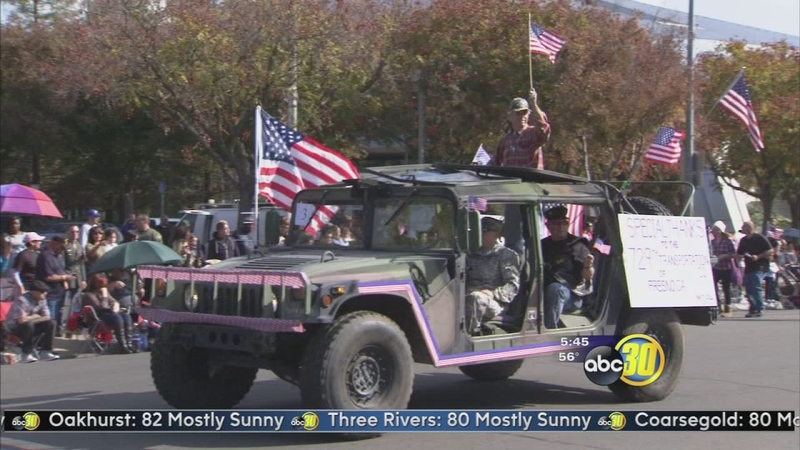 FRESNO, Calif. (KFSN) -- The event is the largest Veterans Day Parade west of the Mississippi River. This year the U.S. Marine Corps will be honored. Yesterday was their 241st birthday.

Those attending are asked to bring an unwrapped toy to donate as the U.S. Marine Corps have started their Toys for Tots drive.

The celebration starts at 10:30 a.m. on Friday with an opening ceremony. The Parade starts at 11 a.m. at P Street and Tulare Avenue and winds over a mile through downtown before ending up at Chukchansi Park.

Parking will be free in downtown Fresno. Those attending are asked to bring an unwrapped toy to donate as the U.S. Marine Corps have started their Toys for Tots drive. Donation boxes will be set up along the parade route.

John DeCicco of Action Towing borrowed a big Navy rig and is parked it at M Street and Inyo Street along the parade route. He'll be out there before 5 a.m. His idea is to feed everybody who comes by with pancakes, eggs, and a bunch of other goodies. He plans to feed up to 1,000 people, maybe more. He himself is a veteran, and he's also hoping to attract this year's Grand Marshal Lt. Col. Oliver North to his rig.