Vietnam veteran from Coalinga reunites with Marine he thought had died

KFSN
By Dale Yurong
FRESNO, Calif. (KFSN) -- A Coalinga man was reunited with a fellow marine who he was told died in Vietnam.

Forty eight years after they shared space on a tank in an iconic photo from the Vietnam War, Rick Hill and Alvin Grantham shared an emotional moment in Grantham's hometown of Mobile, Alabama.

Rick and Grantham both said it was like finally tracking down a brother after so many decades. The two received a heroes' welcome in Mobile. Rick and his wife Hayley made the 2200 mile drive from Coalinga for the reunion.

"Kind of a shock. It was overwhelming to know after all this time that he had made it. That Alvin had made it, and how lucky I am to talk to him," said Rick.

The two marines never really met before. In a famous photo from Life Magazine, they're being medevaced on a tank. Both were wounded during the battle of Hue. Rick was told the guy on his side-- Alvin-- had died.

"I had two broken ribs of course. Got shot through the chest. It was so painful, the ride. The ride was excruciatingly painful," said Grantham.

Grantham was placed into and then taken out of a body bag.

The two exchanged gifts at their lively lunch celebration. Hill received a quilt of valor from the Azalea City Quilters.

Now the two have many more pictures-- happier memories to share with each other and their families.

Famed photographer John Olson has snapped tens of thousands of pictures but he told Action News the one showing those wounded marines was his most memorable.

"I'm grateful he took that picture because I think America likes it," said Rick.

America also loves to see heroes have a good time.

This reunion happened because Rick Hill and Alvin Grantham a few weeks ago responded to a Together We Served Facebook post about that iconic picture.
Related topics:
societycoalingaalabamaveteransvietnam warfresno countyu.s. & worldgood news
Copyright © 2021 KFSN-TV. All Rights Reserved.
RELATED 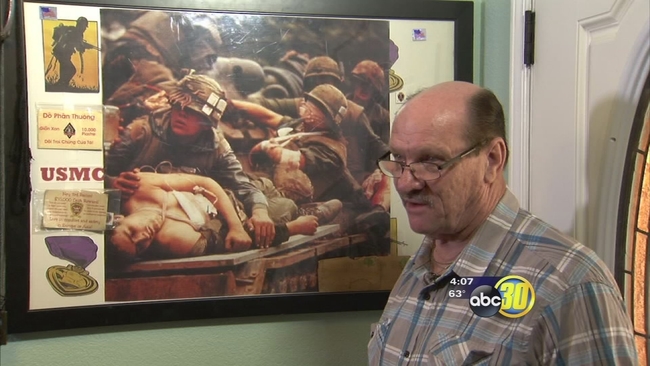