'We need to honor the past:' Renovated 9/11 memorial in Clovis unveiled 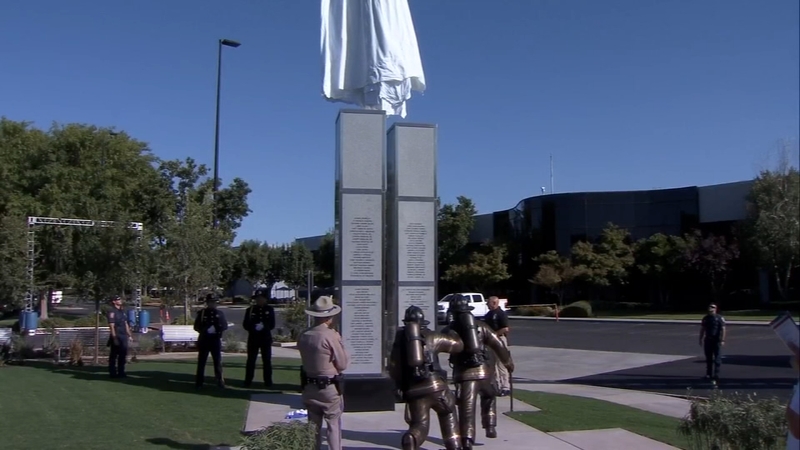 'We need to honor the past:' Renovated 9/11 memorial in Clovis unveiled before 18th anniversary

CLOVIS, Calif. (KFSN) -- An unveiling reminding people to never forget the sacrifices made on September 11th.

"They really have some meaningful pieces that really are close to my heart," said retired New York firefighter Andy Isolano.

The 9/11 memorial in Clovis near Schneider Electric is celebrating a new beginning, one honoring those who made the ultimate sacrifice on September 11th, 2001.

The California 9/11 Memorial Foundation unveiled the first phase of their expansion.

"We need to honor the past, educate the kids and remember," said Clovis Fire Capt. Jim Stemler.

A miniature granite-clad version of the Twin Towers now stands tall. On the opposite side, a fountain of the Pentagon similar to the one at ground zero. The names of the fallen are inscribed on each.

The spot where they are constructed is also significant.

"They have it set so that that sun hits at a specific time and a shadow will be cast on the firefighters right at 8:46 in the morning and the sun will shine on the side of the pentagon that was hit," Isolano said.

First responders are also being honored. Under the towers sits a bronze statue of two firefighters titled, "Answering the Call."
"It is one of only ten in the nation and the only one in California," Capt. Stemler said.

Isolano was a first responder during the attack 18 years ago.

He says the expansion is monumental and hopes it's a place people can gather and come together.

Phase two will include more statues of first responders.