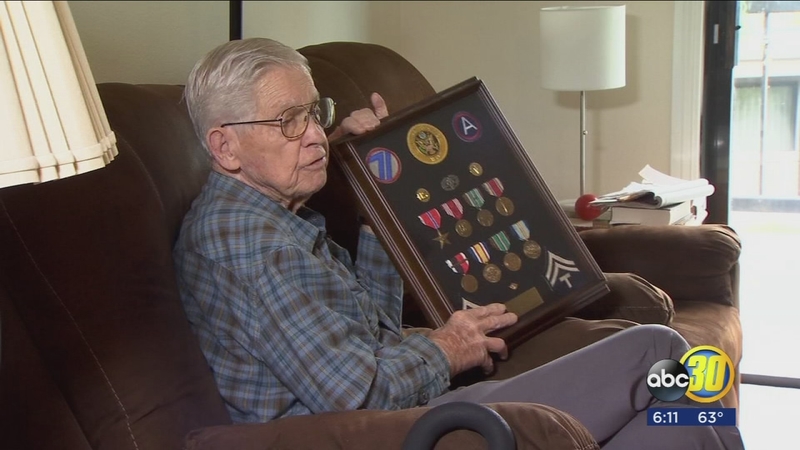 FRESNO, Calif. (KFSN) -- It has been more than seven decades since World War II broke out but Allen Rasmussen remembers his time as a combat medic like it was yesterday.

"My main job was to stabilize them enough to get to a doctor," said Allen Rasmussen.

He was motivated to serve after the attack on Pearl Harbor. At the time he was a junior in college and signed up for the Navy and Air Force but was turned away because of an eye condition, something he later learned was a blessing in disguise. He met his late wife while working as an engineer in the Army.

"We talked about dancing, she said she loved to dance so I convinced her to go dancing with me," said Rasmussen.

He says after a couple tries, their courtship led to a honeymoon and shortly after the newlywed was drafted to serve in World War II.

"About two months later I get a letter from her open it up. It says honey, I'm pregnant," said Rasmussen.

Less then 15 percent of U.S. soldiers in the World War II era saw active combat. Rasmussen is part of the select few still around to share experience from the front lines.

He may not have fired a weapon but he was side by side with soldiers on the battlefield.

"I saw the hell of war hun. We liberated two concentration camps and that's where they had some of them dead or crawling around weighing 65 pounds."

Despite facing enemy fire, treating his wounded comrades, horrific weather conditions, and disease-- the decorated veteran says he would gladly serve his country again, adding he became a combat medic to care for others.

"Well I love the Lord and the Lord loves me he's been taking care of me all my life. I went through things that you wouldn't believe that I told you and he kept me safe all through the war."