Jenna Fischer, Oliver Hudson bring heart to a comedy about divorce in ABC's 'Splitting Up Together' 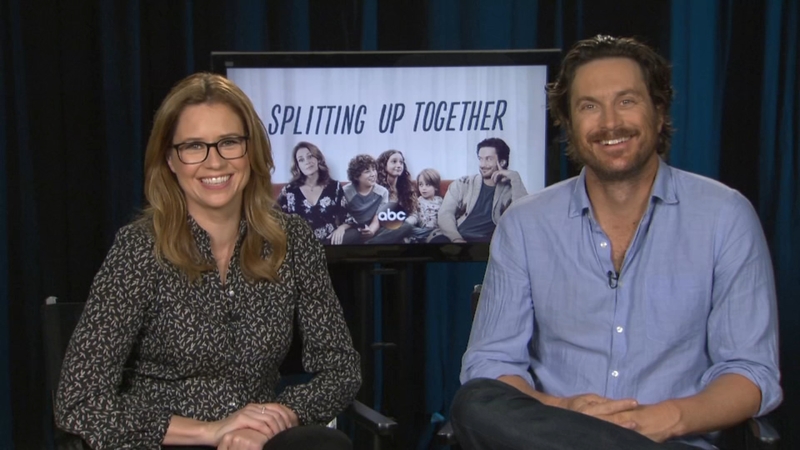 Fischer, Hudson bring heart to 'Splitting Up Together'

NEW YORK -- Splitting Up Together may be a show that revolves around a divorce, but it's got a lot of heart. Jenna Fischer (Lena) and Oliver Hudson (Martin) really show how everyday life can get in the way of romantic feelings and how easy it can be to let marriage slip away.

While that may sound heartbreaking, Fischer and Hudson bring their humor and support of one another as parents to the table, and the result is a fun and touching sitcom.

"What I loved most about it was that yes, it was a comedy, but it dealt with so many other things," Hudson said. "The way that Emily (Kapnek) wrote the script tackled those in a very realistic light and it was executed the same way. Half the scenes we did were dramatic scenes and the comedy comes through the situation, rather than through the punchline of the joke."

Fischer mentioned that one fan, who was a child of divorced parents, told her it was nice to see an amicably divorced couple depicted on television.

One thing is for sure, the stars are having a fun time working together.

"We want people to watch the show because we want to continue to be employed together," Fischer said. "We really like this project, please! If for no other reason, turn it on and walk away!"

One storyline has Hudson taking some ballroom dancing lessons, and as you will see as a viewer, he's quite good!

"I don't do any ballroom dancing, but I was a part of a dance crew back in my teens called 'The Rice Krispies' snap, crackle and pop, so I do have some rhythm, I do!" Hudson said. "They brought in someone from Dancing with the Stars and it was so much fun!"

Fischer threw out the idea of her and Oliver learning a dance as a promo for Dancing with the Stars.

Everyone has a favorite blanket. Get cozy with an all-new #SplittingUpTogether tonight on ABC! pic.twitter.com/7rAmJewJZ4